Controller Gain Optimization for Position Control of an SMA Wire 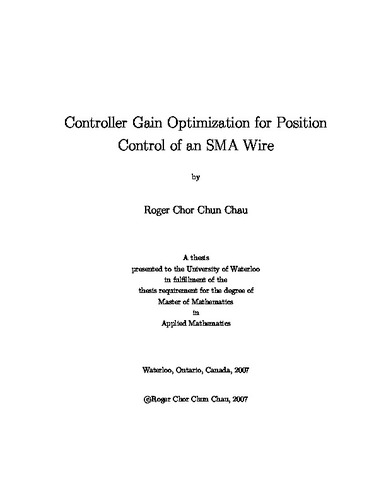 There has been an increasing interest in the field of `smart structures' and `smart materials'. In constructing smart structures, a class of materials called smart materials are often used as sensors and actuators. An example of a smart material is shape memory alloy (SMA). A common actuator configuration uses an SMA wire with a constant load. The non-linear input-output behaviour of SMAs, known as hysteresis, made them difficult to model and control. The research in this thesis examines the effect of PID-controller gain optimization on SMA wire control at different frequencies of operation. A constant-load SMA wire actuator with a PID-controller is used in the study. Heat is applied to the wire using an input electric current. The system is cooled through convection with the surrounding area. The lack of active cooling prevents the system from operating at high frequencies. Three different cost functions are proposed for various applications. The Preisach model is chosen to model the hysteretic behaviour of the SMA wire contraction. Varying material properties such as electrical resistance and heat capacities are modelled to give a more accurate representation of the system's physical behaviour. Simulations show that by optimizing the controller gain values, the bandwidth of the system is improved. An interesting observation is made in the heating cycle of the SMA wire. In order to achieve faster cooling, overshoot is observed at low frequencies. This is a result of the system hysteresis. The system hysteresis allows different input signals to achieve the same output value. Since the rate of cooling is proportional to the temperature above ambient, better cooling is achieved by reaching a higher temperature. The error caused by the overshoot is compensated by the better cooling phase, which is not actively controlled.