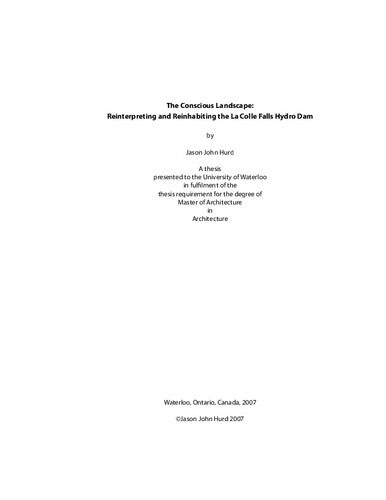 The ruins of the La Colle Falls Hydro Dam encompass two very distinct topographies: the physical landscape of the vast Canadian Northwest, and the complex emotional terrain of the urban mythology of the city of Prince Albert, Saskatchewan. In 1912 the city embarked on the ambitious project, building a dam and shipping lock on the North Saskatchewan River to supply the city with cheap and plentiful hydroelectric power and create a navigable inland shipping route from Winnipeg to Edmonton. The people of the community believed that it was poised to become a new commercial centre of the west, a key manufacturing and industrial metropolis. Instead, the project became an enormous and ruinous financial debacle that embarrassed the residents and crippled the urban growth of the city for nearly a century. Its failure, and the consequent suffering it brought permeate local legend to this day. The solution to this negative residual memory exists in the hydro dam’s own genesis: the spiritual and functional significance of the North Saskatchewan River as a site of traditional Aboriginal healing and a crucial regional amenity. Unable to bridle the waters of the North Saskatchewan, the dam instead comprises a dramatic visual testimony to the effects of an enormous work of construction on the panoramic Saskatchewan landscape, and an ideal setting to address the interface of man, structure, and the human body in the natural world. This thesis uses the ruins of the dam as a physical armature on which to construct a spa complex, an architectural insertion that will complete the dam, and present a positive alternative ending to its story. The spa is viewed as a place of intimate physical contact and remedial personal reflection that acknowledges the dramatic landscapes surrounding it, engages the senses, and simultaneously heals the bodies of the patrons while reconciling the latent negative historical memory of the original hydro dam project.