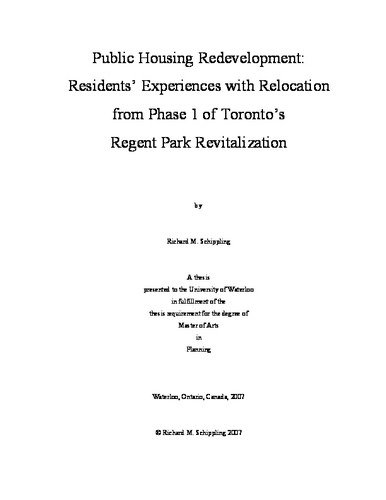 Regent Park is Canada’s largest and among its oldest public housing developments. Like similar large-scale public housing developments across North America, Regent Park has come under considerable criticism for isolating low-income households and facilitating crime, among other things. As a result, an ambitious six-phase, one billion dollar revitalization project was initiated in 2005 to completely re-design Regent Park and integrate the neighbourhood into the urban fabric of Toronto. This qualitative study examines the impact of relocation on residents from phase 1 of this revitalization project. With demolition of the neighbourhood commencing in February of 2005, 370 households from Regent Park were dispersed; some stayed in Regent Park, some moved to surrounding neighbourhoods, and others moved further away in the Greater Toronto Area. Open-ended, semi-structured interviews were conducted with members of 21 of these households in an effort to discover some of the more salient impacts of relocation on the lives of phase 1 residents. Both social and place-based impacts were assessed using the frameworks of social capital and place attachment, respectively. The study was conceived of as the first part of a longitudinal study of relocation and resettlement of public housing residents in Regent Park.