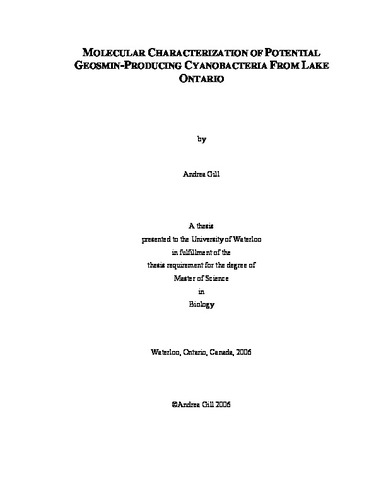 Geosmin is an odorous secondary metabolite produced by some cyanobacteria during growth and released from the cells. Little is known about the biosynthesis of geosmin and the gene(s) required for its production have not been characterized. During late August and early September geosmin episodes due to planktonic cyanobacteria frequently occur in the northwest basin of Lake Ontario waters resulting in taste and odour episodes in drinking water that serves more than 5 million people. At high concentrations geosmin evades traditional drinking water treatment and reaches the tap. These episodes often elicit consumer concern and are wrongly construed to reflect impaired drinking water safety. Water quality managers in the region have generally been unable to prevent or control taste and odour episodes via a proactive approach due to the lack of knowledge of cyanobacterial communities in offshore waters as well as the inability to predict when geosmin will reach intake pipes due to downwelling, the process by which the surface waters mix with the hypolimnion. This study evaluated denaturing gradient gel electrophoresis (DGGE) as a molecular tool for proactive monitoring of potential taste and odour-causing cyanobacteria in environmental samples. The 16S rRNA gene was assessed for its ability to distinguish among geosmin-producing and non-producing strains. This study also examined the evolutionary relationships among geosmin-producing cyanobacteria using the full-length 16S rRNA gene and compared phylogenies with current taxonomy. <br /><br /> A DGGE standard using the V3 hypervariable region of the 16S rRNA gene was developed using geosmin-producing and non-producing isolates of cyanobacteria. Included in the standard was the suspected primary contributor to Lake Ontario taste and odour, <em>Anabaena lemmermannii</em> Richter. This standard was then applied to various environmental collections from Lake Ontario (August 2005) to examine the cyanobacterial community composition. DGGE profiles were consistent with the presence of <em>An. lemmermannii</em> at locations with increased geosmin concentrations (determined using gas chromatography-mass spectrometry), supporting hypothesis that <em>An. lemmermannii</em> is the primary contributor to northwestern Lake Ontario taste and odour. In addition, the application of DGGE in the identification of potential geosmin-producing species of cyanobacteria was deemed to be a potentially useful approach to monitoring cyanobacterial communities in source waters. The 16S rRNA-V3 region alone did not distinguish among geosmin-producing and non-producing strains, however with additional data (actual geosmin concentration) it was showed relationships. <br /><br /> In the phylogenetic analyses, geosmin-producing cyanobacteria did not group monophyletically and it was not possible to state that a single evolutionary event has led to the acquisition of the geosmin-producing trait. Phylogenies also showed that the taxonomy of the Cyanobacteria is largely unresolved. All five Sections (bacteriological classification)/four orders (Komárek & Anagnostidis classification) were paraphyletic, however the heterocystous cyanobacteria (Sections IV and V/Nostocales and Stigonematales) grouped separately from the non-heterocystous cyanobacteria (Sections I, III/Chroococcales and Oscillatoriales). Although both systems of classification compared in this study were similar, nomenclature and groupings were occasionally different among the groups. This demonstrates the incongruity between bacteriologists and phycologists and emphasizes the need for a consensus system of classification for the Cyanobacteria.