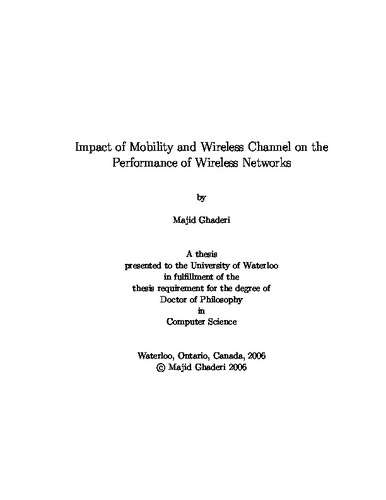 This thesis studies the impact of mobility and wireless channel characteristics, i. e. , variability and high bit-error-rate, on the performance of integrated voice and data wireless systems from network, transport protocol and application perspectives. <br /><br /> From the network perspective, we study the impact of user mobility on radio resource allocation. The goal is to design resource allocation mechanisms that provide seamless mobility for voice calls while being fair to data calls. In particular, we develop a distributed admission control for a general integrated voice and data wireless system. We model the number of active calls in a cell of the network as a Gaussian process with time-dependent mean and variance. The Gaussian model is updated periodically using the information obtained from neighboring cells about their load conditions. We show that the proposed scheme guarantees a prespecified dropping probability for voice calls while being fair to data calls. Furthermore, the scheme is stable, insensitive to user mobility process and robust to load variations. <br /><br /> From the transport protocol perspective, we study the impact of wireless channel variations and rate scheduling on the performance of elastic data traffic carried by TCP. We explore cross-layer optimization of the rate adaptation feature of cellular networks to optimize TCP throughput. We propose a TCP-aware scheduler that switches between two rates as a function of TCP sending rate. We develop a fluid model of the steady-state TCP behavior for such a system and derive analytical expressions for TCP throughput that explicitly account for rate variability as well as the dependency between the scheduler and TCP. The model is used to choose RF layer parameters that, in conjunction with the TCP-aware scheduler, improve long-term TCP throughput in wireless networks. A distinctive feature of our model is its ability to capture variability of round-trip-time, channel rate and packet error probability inherent to wireless communications. <br /><br /> From the application perspective, we study the performance of wireless messaging systems. Two popular wireless applications, the short messaging service and multimedia messaging service are considered. We develop a mathematical model to evaluate the performance of these systems taking into consideration the fact that each message tolerates only a limited amount of waiting time in the system. Using the model, closed-form expressions for critical performance parameters such as message loss, message delay and expiry probability are derived. Furthermore, a simple algorithm is presented to find the optimal temporary storage size that minimizes message delay for a given set of system parameters.

Majid Ghaderi (2006). Impact of Mobility and Wireless Channel on the Performance of Wireless Networks. UWSpace. http://hdl.handle.net/10012/2935