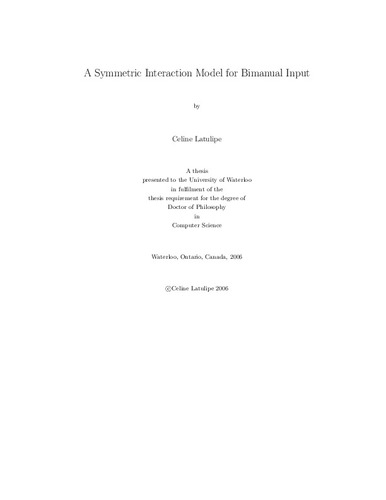 People use both their hands together cooperatively in many everyday activities. The modern computer interface fails to take advantage of this basic human ability, with the exception of the keyboard. However, the keyboard is limited in that it does not afford continuous spatial input. The computer mouse is perfectly suited for the point and click tasks that are the major method of manipulation within graphical user interfaces, but standard computers have a single mouse. A single mouse does not afford spatial coordination between the two hands within the graphical user interface. Although the advent of the Universal Serial Bus has made it possible to easily plug in many peripheral devices, including a second mouse, modern operating systems work on the assumption of a single spatial input stream. Thus, if a second mouse is plugged into a Macintosh computer, a Windows computer or a UNIX computer, the two mice control the same cursor. <br /><br /> Previous work in two-handed or bimanual interaction techniques has often followed the asymmetric interaction guidelines set out by Yves Guiard's Kinematic Chain Model. In asymmetric interaction, the hands are assigned different tasks, based on hand dominance. I show that there is an interesting class of desktop user interface tasks which can be classified as symmetric. A symmetric task is one in which the two hands contribute equally to the completion of a unified task. I show that dual-mouse symmetric interaction techniques outperform traditional single-mouse techniques as well as dual-mouse asymmetric techniques for these symmetric tasks. I also show that users prefer the symmetric interaction techniques for these naturally symmetric tasks.