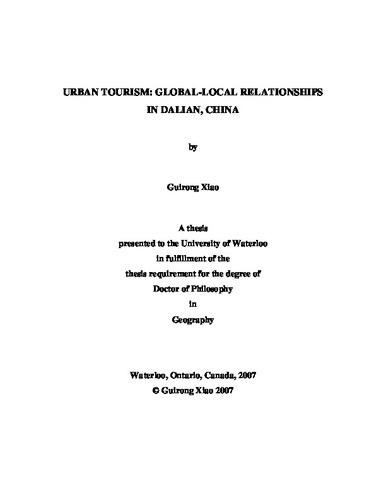 China used to impress the outside world as a country that was focused on its own development with few links to the rest of the globe. However, things have changed and now China is an increasingly important global player. This research uses a case study approach to demonstrate this more recent trend. By looking into the general patterns of urban development and urban tourism in Dalian, a coastal city of northern China, the study documents the efforts that a city in a developing country has made at different stages to link its social and economic development with the global scene, although some of these relationships were imposed by external world powers. Unlike many other Chinese cities which have experienced many planning initiatives, Dalian municipal officials had the foresight to have tourism development included in their urban plans as early as the 1980s, although the real importance of the role of tourism did not materialize until the late 1980s. It has been shown that tourism development of the city has been an integral part of and complementary to the overall urban development strategy. It has helped to strengthen the image of a city whose leaders have been keen to present it as clean, modern, active, and eager to promote itself to the rest of the world. They have striven to do this even though the city is still more influential at the regional rather than the global level. The environmental enhancement has not only upgraded the city’s competitive competence but, along with the construction of numerous tourism facilities, of which conference centres are an example, also embodied the notion put forward in the paper that urban facilities are largely multifunctional and are aimed at and used by clients with multiple purposes. This also implies that tourism is not an end in itself but is one means of facilitating urban development.