Hostility in the context of depression: Testing the relevance of perceived social ranking 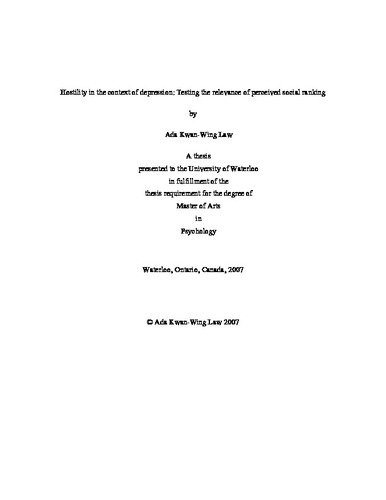 Theoretical positions (Sloman & Gilbert, 2000), current research (Robbins & Tanck, 1997) and clinical observations (APA, 1994) have generally concluded that depressed populations tend to demonstrate an elevated level of hostility. Based on the premises of the Social Rank Theory (SRT; Sloman & Gilbert, 2000), the current study explores the purported etiological underpinnings of the co-occurrence between depression and hostility. The SRT regards depression as a state of inferiority resulting from a drop in social rank and hostility as stemming from a sense of injustice over this inferiority. To test this idea, measures of perceived social rank, depression, trait anger, anger expression and perceived injustice were administered to 97 university students at two time points, one month apart. Long-term rank change was measured retrospectively at Time 1 and short-term rank change was measured prospectively by sampling at Time 1 and Time 2. Three hypotheses were advanced: 1) social rank would be negatively associated with depression; 2) unfavourable rank change would predict greater levels of depression; and 3) unfavourable rank change from an initially superior rank would predict greater levels of anger and perceived injustice. Results were partially supportive of the hypotheses. As expected, social rank was negatively associated with depression. As well, a long-term change in social rank predicted greater levels of anger suppression. Results were discussed with respect to their consistency with the SRT. Potential weaknesses of the methodology and future directions of this line of inquiry were also presented.