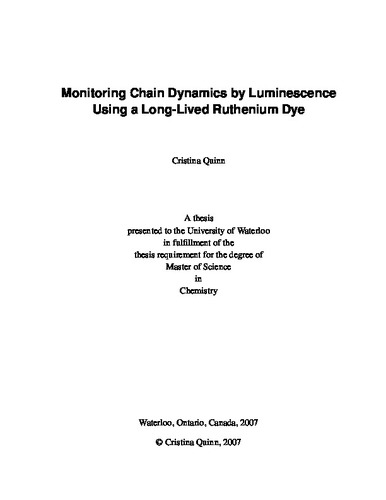 The purpose of this research project was to determine the feasibility of labelling a water-soluble polymer with a water-soluble dye and quencher. The water-soluble dye chosen was bis-(2,2-bipyridine)-ruthenium(II) -5-amino-1,10-phenanthroline hexafluorophosphate, RuNH2 , with a water solubility of 1×10^−3 mol/L. 3,5-Dinitrobenzyl alcohol was found to be an efficient quencher with a quenching rate constant of 2.7×10^9 M^−1 s^−1 as well as a water-solubility of 5×10^−3 mol/L. Both the dye and quencher were modified in a way such that they could be covalently linked to a polymer. RuNH2 was converted to bis-(2,2-bipyridine)-ruthenium(II)-5-isothiocyanato-1,10- phenanthroline hexafluoro-phosphate, RuNCS, using thiophosgene to yield an active isothiocyanate group. 3,5-Dinitrobenzylamine, DNB-NH2 , was synthesized via tritylamination of the commercially available 3,5-dinitrobenzyl chloride. A synthetic pathway has been established to covalently attach the dye and quencher to poly(N,N-dimethylacrylamide)(PDMA). Luminescence of this system was first characterized in N,N-dimethylformamide (DMF) rather than water to allow for future comparisons to be made between this water-soluble system and the previously established non-water-soluble system. Luminescence analysis of the RuNCS labelled polymers in DMF could be fitted with a sum of three exponentials with the strongest contribution being that of a 1000 ns long-lived species which is characteristic of the free dye. A luminescence decay of a polymer labelled with both RuNCS and DNB-NH2 was acquired and showed static quenching of the ruthenium dye by the quencher.