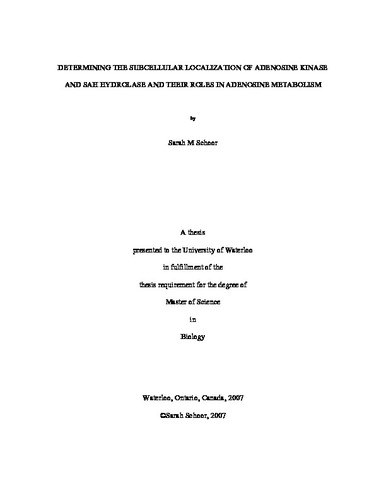 Housekeeping enzymes are vital to the metabolism of all plant cells. Two such enzymes adenosine kinase (ADK) and S-adenosylhomocysteine (SAH) hydrolase share a similar function: both sustain S-adenosylmethionine-dependent methylation reactions by removing inhibitory by-products. SAH hydrolase breaks down SAH which is a competitive inhibitor of all methyltransferase activities. ADK phosphorylates the Ado produced by SAH hydrolase and in doing so drives this reversible reaction in the hydrolysis direction. By catalyzing the phosphorylation of Ado into adenosine monophosphate, ADK not only prevents SAH from re-forming but also initiates the recycling of Ado into adenylate nucleotides and cofactors. This thesis documents two distinct research topics related to methyl recycling in plants. The first goal was to identify ADK-deficient mutants to establish the contribution of this enzyme activity to adenosine salvage. The second goal was to determine the subcellular localization of ADK and SAH hydrolase in Arabidopsis thaliana (Columbia). T-DNA insertion lines for highly similar ADK isoforms (ADK1 and ADK2) and silencing lines of overall ADK activity (sADK) were compared to WT Arabidopsis to identify phenotypic abnormalities associated with ADK deficiency. In addition to following their growth, microscopic analysis was performed on the sADK lines. While removal of either ADK1 or ADK2 had no phenotypic effect, lowering ADK levels to 6-20% that of WT lead to several changes including small, wavy rosette leaves, delayed leaf senescence, decreased internode length, reduced branching, clustered inflorescences and lack of petal abscission and silique dehiscence. Further analysis linked the abnormal phenotype to increased levels of hypomethylation throughout the plant (K Engel unpublished data), as was expected; however higher levels of active cytokinin were also observed. Thus ADK appears to be integral in regulating cytokinin levels as well as recycling methylation intermediates. To investigate the relationship between the subcellular localization of SAH production and its metabolism, immunogold labelling was performed on leaf and meristematic tissues of Arabidopsis using antibodies specific for either ADK or SAH hydrolase. As well, -glucuronidase and green fluorescent protein translational fusions of each enzyme were examined (S. Lee unpublished data). Results of both the immunogold labelling and fusion lines revealed that all ADK and SAH hydrolase isoforms localize to the cytosol, chloroplast and nucleus. Further analysis of purified chloroplasts has given varying results regarding the targeting of these enzymes to the organelle, and further research will be required before ADK and SAH hydrolase can be conclusively localized to the chloroplast.

Sarah Schoor (2007). Determining the subcellular localization of adenosine kinase and SAH hydrolase and their roles in adenosine metabolism. UWSpace. http://hdl.handle.net/10012/2697