Scarf's Theorem and Applications in Combinatorics 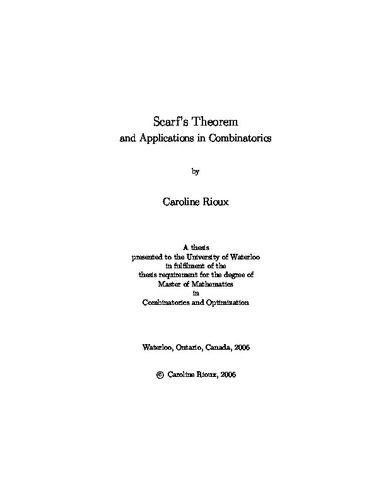 A theorem due to Scarf in 1967 is examined in detail. Several versions of this theorem exist, some which appear at first unrelated. Two versions can be shown to be equivalent to a result due to Sperner in 1928: for a proper labelling of the vertices in a simplicial subdivision of an n-simplex, there exists at least one elementary simplex which carries all labels {0,1,..., n}. A third version is more akin to Dantzig's simplex method and is also examined. In recent years many new applications in combinatorics have been found, and we present several of them. Two applications are in the area of fair division: cake cutting and rent partitioning. Two others are graph theoretic: showing the existence of a fractional stable matching in a hypergraph and the existence of a fractional kernel in a directed graph. For these last two, we also show the second implies the first.