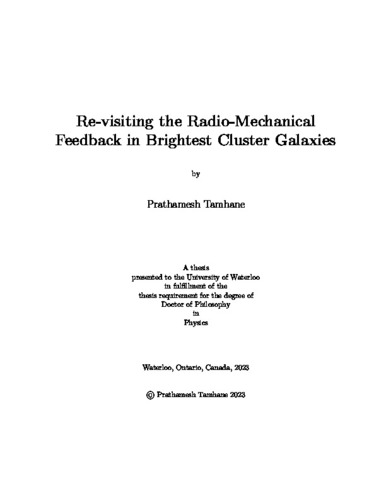 The self-regulated feedback from the Active Galactic Nucleus (AGN) plays a key role in the formation and evolution of galaxies by heating and expelling gas in galaxies. The goal of this thesis is to investigate the role of radio-mechanical AGN feedback in expelling gas in central cluster galaxies (BCGs), triggering star formation in the outflowing gas and promoting runaway cooling of the hot intracluster medium gas. We used ALMA observations to characterize molecular gas flows in 14 BCGs and compared them with molecular flows observed in nearby AGN hosting and starburst galaxies. The molecular flows in BCGs are slower, 10–1000 times larger, 10–100 times heavier and carry more momentum compared to outflows driven by quasar mode AGN feedback and starbursts. The kinetic power of flows lies substantially below driving power. The lifting factor, a product of flow mass and radius divided by the driving power, is substantially larger in BCGs showing that radio feedback, when active, is more effective at lifting gas. BCGs form fewer stars per unit molecular gas mass, suggesting that star formation is suppressed, perhaps because the gas in these systems rarely forms molecular disks. The radio mode feedback can drive massive gas outflows and suppress star formation in negative feedback. Paradoxically, radio jets can not only inhibit star formation but also trigger star formation. In chapter 3, we studied one such example of radio-jet triggered star formation in the BCG of the Abell 1795 cluster using VLT optical spectroscopy, HST and ALMA data. Abell 1795 has bright UV filaments surrounding radio jets indicating recent radio jet-triggered star formation. The total extinction corrected star formation rate in the BCG is 9–21 M⊙ yr−1 . We showed that the star formation follows the Kennicutt-Schmidt law with a low efficiency. The gas depletion time of 1 Gyr due to star formation is longer than the dynamical time of the outflow, indicating that star formation may be eventually quenched. The velocity structure function of the warm ionized gas suggests that radio jets may be able to drive supersonic turbulence. Thus radio-mechanical feedback can both trigger and inhibit star formation in the same galaxy on different timescales. Heating from radio-mode feedback does not completely offset cooling of hot gas at all times, as many BCGs have large amounts of cold gas. We also studied the formation of cold gas by cooling of uplifted low entropy gas from centres of galaxy clusters by cavities in 24 galaxy clusters and their BCGs. We showed that single generation of cavities cannot lift enough low entropy gas to form observed amount of cold gas in BCGs. The amount of uplifted gas expected to have cooled from cavities within their lifetimes is less than the observed cold gas mass in many BCGs suggesting that either efficient gas cooling is v required or that the uplift mechanism alone cannot produce all the cold gas in BCGs. The average altitude to which the gas needs to be lifted by cavities to cool before it falls back is also large (∼80 kpc) compared to the observed extent of nebular emission even in the most extended systems. Therefore, we found that stimulated feedback by uplift alone is generally insufficient to explain the observed levels of molecular gas mass in BCGs.