Improving Productivity in Bioreactors through Control of Cell Heterogeneity 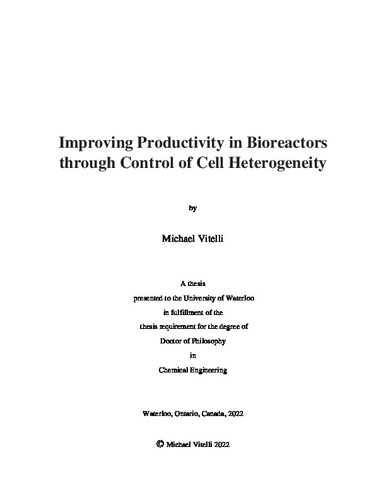 Whooping cough, also referred to as pertussis, is a highly contagious bacterial respiratory tract disease. At Sanofi Pasteur, the fermentation step in the manufacturing of the vaccine for pertussis involves a sequence of reactors of increasing volume in which the final cell population from one reactor in the train is used to inoculate the following reactor. A main challenge with this operation is that the yield of the vaccine antigens can be highly variable. In particular, pertactin, which is generated in low levels and is highly variable relative to that of the other antigens of the vaccine, has a highly variable production rate thus posing a major bottleneck to the overall productivity. Based on the findings of previous studies by our group (Zavatti, 2019), oxidative stress appears to be related to the variability in productivity of antigens and pertactin in particular. To explain the observed variability of the process, we also hypothesize that the time profiles of dissolved oxygen, pH, temperature and aeration rates during fermentation may not accurately capture the presence of highly stressed cells within the cell population since they only reflect averaged measures of the cell population at any given time. Instead, only cytometric analysis of the heterogeneity of the cell population can provide a correct measure of the level of stress and its impact on productivity. Also, based on the hypothesis that population heterogeneity influences overall productivity, it was further hypothesized that the evolution of the fermentation process depends on the heterogeneity of the inoculum used to start the fermentation process. Then, it is argued that the process can be improved by using an inoculum that is tailored by means of cell sorting. The current work focuses on the impact of oxidative stress and the growth profile of Bordetella pertussis and heterogeneity of intracellular concentrations for four main areas of application: 1. investigation of the possible origins of the oxidative stress in the manufacturing process. 2. development of a metabolic model describing the effect of oxidative stress on the growth of B. pertussis. 3. development of a coupled population balance-oxidative stress model to relate the heterogeneity of intracellular concentrations to B. pertussis growth profiles. 4. development of a protocol to sort B. pertussis on the basis of surface antigen concentration with the purpose of re-culturing. Zavatti (2017) found that a high reactive oxidative species (ROS) at the beginning of the fermentation is associated with a low pertactin yield. One of the purposes of developing a mechanistic model is to determine whether the low growth rate is caused by high ROS levels or the two are merely correlated. This information could help to identify operating conditions that lead to high ROS. The model of Himeoka and Kaneko (2017) was developed to describe the explain the general behaviour during the lag, exponential growth, stationary and death phases without resorting to detailed mechanisms. In this study, we have adapted and extended this model to understand and describe the relation between cell growth, oxidative stress and NADPH under different oxidative conditions during the pertussis vaccine production. In view of the differences between B. pertussis to other bacteria, a main goal of the study is to assess via flask studies and model predictions whether the ROS level is the key determinant of growth under different ROS-inducing conditions rather than other factors such as substrate (glutamate) inhibition. Evaluation of the root-mean-square-error (RMSE) and Akaike information index (AIC) showed that the fit of this new oxidative stress model to the experimental data was considerably better than that of a Contois-based model. The AIC is a particularly useful measure of the trade-off between model dimensionality and predictability in this case since the oxidative stress model involves a greater number of parameters than the Contois model. Also, the model and experimental data verified that high ROS levels at the beginning of flask culture is correlated to low growth profiles but is probably not the cause of the reduced biomass concentration. Population balance models (PBMs) were formulated to describe the evolution in time of the cell population in terms of growth and oxidative stress. Flow cytometry data was used to gain insight into the distribution of important quantities (e.g., cell size, intracellular concentrations of metabolites) over the entire cell population. A coupled population balance-oxidative stress model was developed to predict distributions in cell size and intracellular glutamate, ROS, NADPH and NADP+ concentrations in shake flask cultures of B. pertussis. The major advantage of using a PBM is that it accounts for the distributions and can predict the heterogeneity of the cell population with respect to experimental conditions that are averaged out in bulk models. When comparing the coupled population balance – oxidative stress model to the bulk oxidative stress model, it is apparent that the PBM provides much better predictions of the intracellular ROS concentration. We hypothesize that due to the nonlinear relations between cell growth and oxidative stress, intracellular and cell surface quantities can be better modeled with population balance models. Flow cytometry sorting is an extension of flow cytometry that enables cells to be sorted based on any property measured via flow cytometry. The actual sorting operation occurs downstream from the detectors that measure the light scattering and fluorescence energy. One of the hypotheses of the current work was that productivity can be enhanced by sorting a population of highly producing cells followed by cultivation of the sorted population. To avoid a lengthy a validation of the manufacturing process by mutating B. pertussis cells to find a high pertactin-producing strain, a sort based on epigenetics was analyzed. However, the sorted cell populations were not able to maintain the properties for which they were selected, although the protocol was able to select B. pertussis cells which grew at a faster rate than the control seed provided by Sanofi.