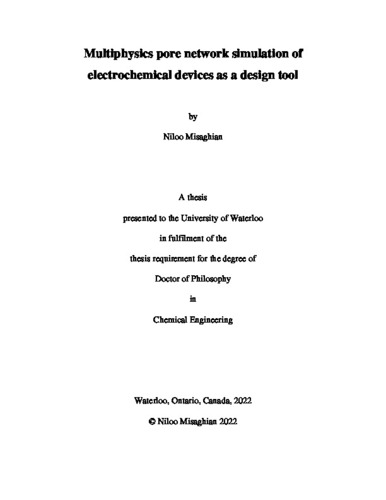 Redox flow batteries including the vanadium redox flow battery (VRFB) and Zn-air batteries have attracted attentions in energy storage projects due to their scalability and high energy density. Performance of these devices is particularly dependent on the transport processes occurring in their porous electrodes which are in turn dependent on their microstructure. As a result, researchers have been focused on designing electrode structures that enhances the performance of the energy storage devices and reduces their operational cost. For this purpose, pore-scale modeling of reactive transport phenomena in porous electrodes is of strong interest to help unravel the structure performance relationship of porous electrodes. Two main approaches in pore-scale modeling are direct numerical simulations (DNS), and pore network modeling (PNM). DNS methods are computationally expensive especially in large samples and multiphysics and/or multiphase problems. PNM has been successfully used in porous electrode studies such as fuel cells due to its lower computational cost. However, PNM for structural design and studies of redox flow batteries including Zn-air and vanadium redox flow batteries (VRFB) requires improvements due to the more complicated multiphysics occurring. This thesis aims towards utilizing and improving pore network modeling framework for these two types of batteries by developing a rigorous framework that can be used for structural-performance and design studies of porous electrodes. The development of a rigorous PNM framework for studying the microstructures in VRFB and Zn-air electrodes requires enhancements in the PNM. For example, in VRFB the effect of both mass transfer coefficients and migration are required to be captured. Moreover, to study the impact of various structures, a workflow is required for in-silico generation of materials with realistic properties to which PNMs can be applied to simulate performance. To resolve these issues, modifications on the PNM topology and formulations were applied to accommodate mass transfer coefficients. A framework was developed to generate fibrous materials with novel multi-layer structures and analyze their microstructure and performance relationship. It was found that in an interdigitated flow field placing a higher permeability layer near the membrane provided higher current density in contrast to the opposite order of the layers. The higher current density was due to higher flow rates in the regions closer to the membrane that were otherwise exhausted. However, it was shown that selecting the optimum design solely based on current density was ambiguous, as additional operational conditions such as pumping cost must be included in the selection process. Another essential improvement on PNM framework is to properly capture complex multiphase transport in porous electrodes, such as air electrodes in Zn-air flow batteries. This improvement is essential, as air electrodes operate with triple phase boundary regions where oxygen reduction reaction takes place within the pore-scale microstructure. A framework was developed to include the dissolution of oxygen in multiphase transport formulations and study the relationship between electrolyte invasion configuration, liquid-gas interface and performance of the air electrodes. It was found that invasion of electrolyte from low to intermediate saturation provides additional liquid-gas interface and higher power density while the optimum saturation depends on the structure, which was further investigated in terms of the pore size distribution. Finally, a key step in PNM of porous electrodes is to properly represent the porous structure in the model, both topology and geometry. Much effort has been focused on improvements on extracting the network and properly estimating its mass transport properties, such as diffusive conductance. In extracted networks from volumetric images, this value is found by analyzing the geometrical properties of the pore-to-pore image or direct numerical simulation methods. DNS methods provide a more accurate estimation; however, they are computationally expensive. To resolve this issue, an image-based deep learning framework was developed to estimate diffusive conductance of PNM elements. It was shown that the deep learning framework can speed up the estimation of conductance values by 500x in contrast to DNS methods while providing a more accurate estimation in contrast to classic analytical solutions and geometry-based methods. The developed framework can be applied to migrative transport of species and dispersion, as they include the same parameter, thereby useful in modeling porous electrodes. The presented work in this thesis was focused on improving PNM framework to include mass transport processes more effectively in multiphase and multiphysics problems with emphasis on electrochemical modeling of porous electrodes. The developed frameworks have enabled the study of microstructure and performance relationship in redox flow batteries including metal-air and vanadium redox flow battery. The developed in-silico generation of microstructures and performance analysis using PNM can be used as a computationally efficient tool to design high performing porous electrodes.