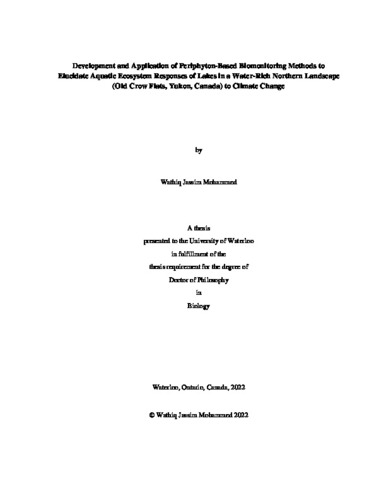 Shallow freshwater lakes are abundant in Arctic and subarctic regions, where they provide important wildlife habitat and sustain the cultural heritage and traditional land use of Indigenous communities. Concern over effects of climate change on shallow northern lakes, including warming and associated increase of evaporation and shifts in precipitation, however, elicits a need for agency-led, long-term, biomonitoring programs to implement protocols applicable across large, remote landscapes. My research focuses on lakes of the Old Crow Flats (OCF), a 5,600 km2 lake-rich thermokarst landscape in northern Yukon recognized as a Ramsar Wetland of International Importance for ecosystem services provided to wildlife and the Vuntut Gwitchin First Nation (VGFN). There, climate warming has raised uncertainty about sustainability of traditional activities in the landscape and challenges natural resource stewardship. The research employs analysis of periphytic diatom community composition accrued on artificial-substrate samplers and water chemistry in lakes of the Old Crow Flats (Yukon Territory, Canada), where spatial and temporal variation in input water sources and water balance has been characterized using water isotope tracers, to explore the ability of diatoms to discern ecological responses to shifts in basin hydrology. The findings are reported in two data chapters. One chapter explores spatial variation across a set of lakes that span the hydrological gradients of OCF during ice-free seasons of 2008 and 2009. The other chapter assesses temporal variation at 14 lakes during a 12-year-long monitoring period (2008-2019) when water isotopes document increasing input of rainfall and possibly permafrost thaw on their water balance. Results of multivariate analyses based on the spatial data set (33 and 48 lakes sampled in 2008 and 2009, respectively) demonstrate that water chemistry and diatom community composition differ among three isotope-defined hydrological lake categories based on differences in input water sources (snowmelt-dominated, rainfall-dominated, intermediate). Some snowmelt-dominated lakes support moderate percent abundances of Rossithidium pusilla, Sellaphora laevissima, Tabellaria flocculosa str. III and T. fenestrata, associated with relatively high concentrations of major nutrients and dissolved organic carbon (DOC). Rainfall-dominated lakes have higher pH and ion content, yet diatom composition overlapped extensively with intermediate and snowmelt-dominated lakes. Water chemistry and diatom community composition did not differ between study years, despite almost four-fold greater snowfall in 2009. Overall, the results reveal that periphytic diatom communities on artificial-substrate samplers capture ecological differences across hydro-limnological gradients of Old Crow Flats, but longer time-series of data are required to assess their ability to track temporal responses to hydro-climatic variation. The spatial dataset of OCF lakes sampled during 2008 and 2009 for analysis of periphytic diatom community composition and water chemistry was used to inform interpretations of temporal changes in diatom community composition that accrued on artificial substrate samplers deployed during thaw seasons of a 12-year period (2008-2019) at 14 long-term monitoring (LTM) lakes and infer shifts in water chemistry. Ordination by CCA reveals that periphytic diatom communities at 10 of the 14 LTM lakes (71.4%) converged towards composition typical of lakes with rainfall-dominated input waters by 2019 due to relatively high or rising percent abundance of the diatom taxa Achnanthidium minutissimum, Gomphonema angustum, G. capitatum, Diatoma tenuis, and/or Eunotia obscurum. These include 4 of the 5 lakes that were dominated by rainfall input water at the beginning of the monitoring period (OCF 29, 37, 38, 49), where diatom community composition remained relatively unchanged, as well as 5 of the 6 lakes that began in the intermediate category (OCF 19, 34, 35, 46, 48), and one of the 3 lakes that began in the snowmelt-dominated category (OCF 58). Four of the 14 LTM lakes reveal patterns of change that are not consistent with a shift towards diatom communities typical of rainfall-dominated lakes. These include two lakes (OCF 26, 55) where diatom community composition remained relatively constant during the entire monitoring period and indicative of conditions typical of lakes with snowmelt-dominated inflow. They also include a lake that recently drained (OCF 6) and a lake with a particularly large catchment area (OCF 11) where Cocconies lineata dominated diatom communities and where basin hydrology appears to be strongly influenced by both rainfall and snowmelt input. Overall, these findings suggest that composition of periphytic diatom communities on artificial-substrate samplers tracks aquatic ecosystem responses to temporal trends in climate-mediated hydrological change.