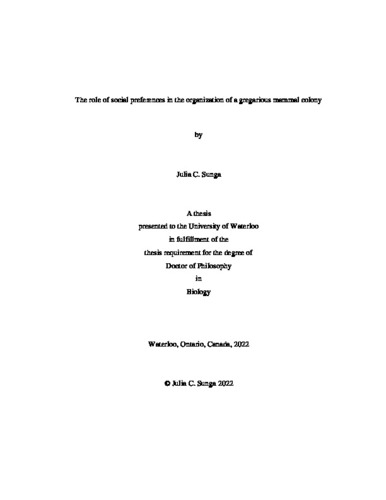 Social preferences are often demonstrated to exist in “intelligent”, long-lived species, such as cetaceans and primates, where individuals have the opportunity to form relationships with conspecifics through repeated interactions. The long lifespan of bats combined with the regular roost switching behaviour of females in some temperate species, presents opportunity for females to build and act on social relationships. However, regular roost switching also poses a challenge for teasing apart the individual influences of social and habitat preferences. To gather evidence for the influence of social preference, I tested predictions of a hypothesis that bats select daily roosts based on social preferences. Using a system of little brown myotis (Myotis lucifugus) individually marked with passive integrated transponder tags and passively monitored roost boxes in Newfoundland, Canada, I quantified the number of days bats spent in each roost, and the number of days spent sharing a roost with other marked bats to characterize patterns in co-roosting association. I found that patterns of roost use do not entirely explain the frequency of roosting association between pairs of female bats. Further, association patterns showed predictable changes following estimated parturition dates, estimated based on nighttime roost revisit behaviour, as adult females are expected to experience changes in selective pressures and mobility with the onset of the lactation period. I also found that patterns of roosting association between individual bats often persisted for more than 5 years and could even persist for up to 10 years following the first observed interaction. Using this same dataset, I also address the effect of missing information on estimates of social network structure, providing a deeper understanding of the ability of these results to inform on the structure of the underlying population. Overall, my findings add to evidence that supports that bats act on social preferences, and thus make a case for social complexity in bat groups. These findings further suggest that, perhaps due to their similarly long life spans, bats may be more similar to their large-bodied, “intelligent”, mammal counterparts than previously expected.

Julia Sunga (2022). The role of social preferences in the organization of a gregarious mammal colony. UWSpace. http://hdl.handle.net/10012/18943