On the Properties and Structure of Bordered Words and Generalizations 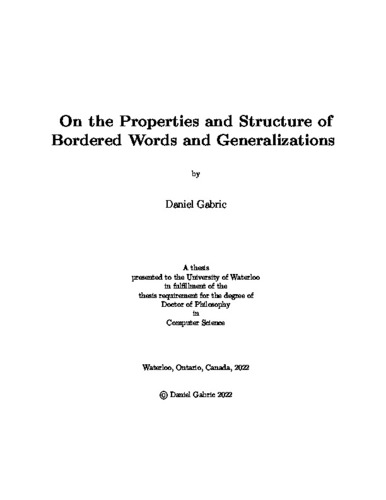 Combinatorics on words is a field of mathematics and theoretical computer science that is concerned with sequences of symbols called words, or strings. One class of words that are ubiquitous in combinatorics on words, and theoretical computer science more broadly, are the bordered words. The word w has a border u if u is a non-empty proper prefix and suffix of w. The word w is said to be bordered if it has a border. Otherwise w is said to be unbordered. This thesis is primarily concerned with variations and generalizations of bordered and unbordered words. In Chapter 1 we introduce the field of combinatorics on words and give a brief overview of the literature on borders relevant to this thesis. In Chapter 2 we give necessary definitions, and we present a more in-depth literature review on results on borders relevant to this thesis. In Chapter 3 we complete the characterization due to Harju and Nowotka of binary words with the maximum number of unbordered conjugates. We also show that for every number, up to this maximum, there exists a binary word with that number of unbordered conjugates. In Chapter 4 we give results on pairs of words that almost commute and anti-commute. Two words x and y almost commute if xy and yx differ in exactly two places, and they anti-commute if xy and yx differ in all places. We characterize and count the number of pairs of words that almost and anti-commute. We also characterize and count variations of almost-commuting words. Finally we conclude with some asymptotic results related to the number of almost-commuting pairs of words. In Chapter 5 we count the number of length-n bordered words with a unique border. We also show that the probability that a length-n word has a unique border tends to a constant. In Chapter 6 we present results on factorizations of words related to borders, called block palindromes. A block palindrome is a factorization of a word into blocks that turns into a palindrome if each identical block is replaced by a distinct character. Each block is a border of a central block. We call the number of blocks in a block palindrome the width of the block palindrome. The largest block palindrome of a word is the block palindrome of the word with the maximum width. We count all length-n words that have a width-t largest block palindrome. We also show that the expected width of a largest block palindrome tends to a constant. Finally we conclude with some results on another extremal variation of block palindromes, the smallest block palindrome. In Chapter 7 we present the main results of the thesis. Roughly speaking, a word is said to be closed if it contains a non-empty proper border that occurs exactly twice in the word. A word is said to be privileged if it is of length ≤ 1 or if it contains a non-empty proper privileged border that occurs exactly twice in the word. We give new and improved bounds on the number of length-n closed and privileged words over a k-letter alphabet. In Chapter 8 we work with a generalization of bordered words to pairs of words. The main result of this chapter is a characterization and enumeration result for this generalization of bordered words to multiple dimensions. In Chapter 9 we conclude by summarizing the results of this thesis and presenting avenues for future research.

Daniel Gabric (2022). On the Properties and Structure of Bordered Words and Generalizations. UWSpace. http://hdl.handle.net/10012/18874