Bifurcation and Robust Control of Instabilities in the Presence of Uncertainties 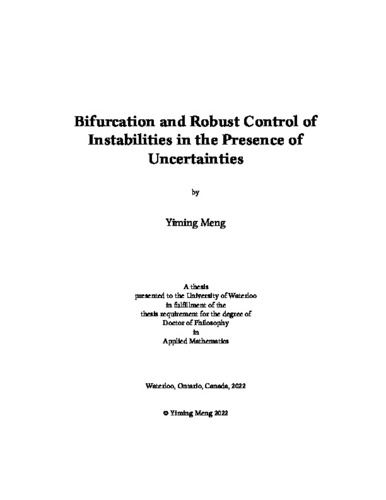 In real-world applications, nominal mathematical models that are used to describe the state behaviors of dynamical systems are usually less robust to deal with environmental disruptions. Uncertainties, such as imprecision of signals, Gaussian-type white noise, and observation er- rors, may be injected into the systems and create substantial impacts on stability and safety etc. To better understand and hence robustly eliminate the potential negative impact, this thesis aims to develop novel control methods and bifurcation analysis for general nonlinear systems that are subjected to such types of perturbations. The first main aspect of the research addresses the verification and control synthesis of more complex tasks with ω-regular linear-time properties besides stabilization problems for more general perturbed finite-dimensional nonlinear systems. Rigorous abstraction-based for- mal methods compute with guarantees a set of initial states from which the trajectories satisfy or a controller exists to realize the given specification, however, at the cost of heavy state-space discretization and potential difficulties of adjusting the speed of the dynamical flows. This the- sis proposes discretization-free Lyapunov methods to handle verification and control synthesis for building-block specifications such as safety, stability, reachability, and reach-and-stay spec- ifications. In the presence of non-stochastic and stochastic perturbations, respectively, rigorous analysis is conducted upon the fundamental mathematical guarantees of satisfying the above mentioned specifications using Lyapunov-like functions. A comparison between the proposed Lyapunov method and formal methods is illustrated via numerical simulations for the case with non-stochastic perturbations. In terms of formal verification and control synthesis for stochastic systems, the current literature focuses on developing sound abstraction techniques for discrete-time stochastic dy- namics without extra uncertain signals. However, soundness thus far has only been shown for preserving the satisfaction probability of certain types of temporal-logic specification. We fo- cus on more general discrete-time nonlinear stochastic systems and present constructive finite- state abstractions for verifying or control synthesis of probabilistic satisfaction with respect to general omega-regular linear-time properties. Instead of imposing stability assumptions, we analyze the probabilistic properties from the topological view of metrizable space of probability mea- sures. Such abstractions are both sound and approximately complete. That is, given a concrete discrete-time stochastic system and an arbitrarily small L1-perturbation of this system, there exists a family of finite-state Markov chains whose set of satisfaction probabilities contains that of the original system and meanwhile is contained by that of the slightly perturbed system. A direct consequence is that, given a probabilistic linear-time specification, initializing within the winning/losing region of the abstraction system can guarantee a satisfaction/dissatisfaction for the original system. We make an interesting observation that, unlike the deterministic case, point-mass (Dirac) perturbations cannot fulfill the purpose of robust completeness. The second aspect of the research addresses the bifurcation analysis in parabolic stochastic partial differential equations (SPDEs). We consider cases with small additive and multiplicative space-time noise, respectively, and conduct a local bifurcation analysis via a multiscale tech- nique. In the presence of small additive noise, we make assumptions that the noise only acts on the stable fast-varying modes. We apply homogenization techniques based on recent advances for systems with one-dimensional critical mode directly to the perturbed Moore-Greitzer full model for the detection of modern jet engine compressor stall. We rigorously develop low- dimensional approximations using a multiscale analysis approach near the deterministic Hopf bifurcation point that occurs within the infinite-dimensional subspace. We also show that the reduced-dimension approximation model contains a multiplicative noise. To better understand the long-term behavior of SPDEs near the deterministic Hopf bifur- cation point and demonstrate the stochastic Hopf bifurcations under the impact of small mul- tiplicative noise, we focus on the system with only cubic nonlinearities and use a different approach other than stochastic averaging/homogenization. We propose a simplified equation that has the same linearization as the original equation and prove the error bounds. It can be shown that the stable marginals do have a small impact on determining the stochastic bifurca- tion points. This approximation scheme does not reduce the stochastic effects from the stable modes to point-mass perturbations, and can be allied with the almost-sure exponential stabil- ity of the trivial solution to analyze the stochastic bifurcation diagram as the noise becomes smaller.

Yiming Meng (2022). Bifurcation and Robust Control of Instabilities in the Presence of Uncertainties. UWSpace. http://hdl.handle.net/10012/18871