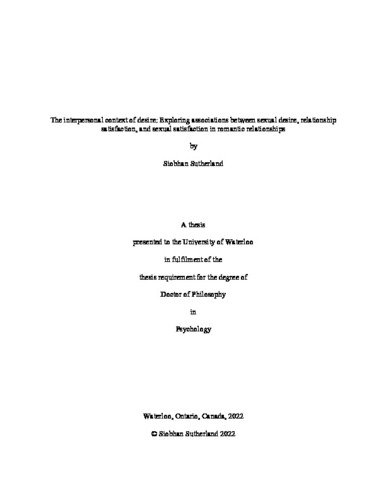 Research has consistently shown that sexual desire, the motivation to seek out or become receptive to sexual stimulation, is associated with positive intrapersonal and interpersonal outcomes (Chao et al., 2011; Dosch, Rochat, et al., 2016; Laumann et al., 1999). Therefore, understanding the factors that contribute to and maintain sexual desire in long-term romantic partnerships is important for both the well-being of individual partners and for the couple as a unit. Empirical evidence shows, however, that sexual desire tends to decline over the course of long-term relationships, particularly for women (Klusmann, 2002; McNulty et al., 2016; Murray & Milhausen, 2012), and that sexual desire difficulties are the top concern reported by couples seeking sex therapy (Leiblum, 2010). Until recently, most of the research on sexual desire difficulties examined this issue as it relates to individual sexual functioning, while much less attention was paid to how couple-level factors (e.g., desire discrepancies, partner effects) relate to desire outcomes. While examining sexual desire issues from both perspectives is informative, using a dyadic lens to study these difficulties accounts for the mutual influence that partners have over each other’s sexual outcomes. In the current research, I conducted three studies that investigated how interpersonal factors relate to sexual desire for couples in long-term heterosexual relationships. In Study 1, I examined the extent to which sexual desire difficulties are viewed as a problem for men and women in heterosexual relationships. From a list of relational sexual problems (e.g., frequency of sex, showing interest in having sex), partners rated how problematic each issue was in their sexual relationship. Results showed that the most common and severe problems in participants’ sexual relationships centered on the theme of sexual desire, and men and women agree on the extent to which these issues are problematic. Given that women report high rates of sexual desire difficulties (Laumann et al., 1999, 2005, 2008; Shifren et al., 2008; West et al., 2008), and tend to be the lower desire partner when a desire mismatch exists in a heterosexual relationship (Sutherland et al., 2015; Willoughby et al., 2014; Willoughby & Vitas, 2012), Study 2 examined factors related to low desire for women. Using latent profile analysis, I investigated whether women with low desire differ qualitatively from one another based on group differences across environmental, sexual, and relational variables. Results supported a three-profile solution, with two distinct profiles emerging for women with low sexual desire: 1) The Globally Distressed Group, and 2) The Sexually Dissatisfied Group. In addition, a third profile emerged that consisted of generally satisfied women with average desire (Average Desire Group). Findings suggest that women with low desire not only differ qualitatively from women with average desire, but also from one another based on variations is sexual and relational factors. The third and final study in this program of research examined the dyadic longitudinal relationship between sexual desire and sexual satisfaction. Both members of a couple completed self-report measures of sexual desire and sexual satisfaction at two time points separated by a two-year period. Latent difference score (LDS) structural equation modeling was used to test the relative impact of earlier individual (actor effects) and partner (partner effects) sexual desire and sexual satisfaction on changes in these constructs over time. Results showed that actor and partner effects are involved in the relationship between sexual desire and sexual satisfaction, but that the direction of these effects differs by gender. Taken together, the findings from this research support the importance of examining sexual desire from an interpersonal lens as relational factors play an important role in couples’ experiences of desire.