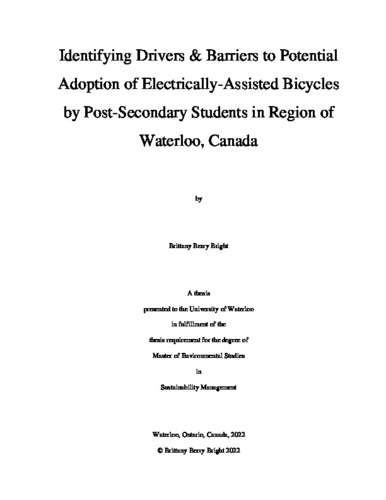 The electrically-assisted bicycle (EAB) is a relatively new innovation to the Canadian market with little adoption so far, though it could be a solution to sustainability issues in passenger transport for several groups of people, including students. Due to its limited uptake in much of the world, there is little previous research on EAB adoption by students and in North America in general. As with other environmentally-friendly innovations, the Innovation-Decision Process from Roger’s (1962/2003) Diffusion of Innovations was identified as a useful framework for understanding adoption potential for EAB’s. The IDP model outlines a process of stages towards adopting an innovation, as affected by five different influences, three of which are investigated in this study: prior conditions, characteristics of the potential adopter, and characteristics of the innovation. Using a predictive, pre-adoption perspective, this study aimed to identify the most influential drivers and barriers to potential EAB adoption through a web survey of post-secondary students in the Region of Waterloo in Ontario. Specifically, it set out to do this with the following objectives: to understand students’ perceptions of the EAB’s innovation characteristics; to identify relationships between those perceived characteristics of the EAB and students’ commuting needs; and to investigate how those EAB perceptions may be related to separate factors such as students’ socio-demographics, their environmental behaviour, and contextual prior conditions. Response data from 364 students included variables about the students themselves, their commuting situations, and their evaluations of the EAB and other transportation modes. These data included participants’ responses to two sets of questions on 5-point Likert scales, which were used to assign multi-item scores for students’ levels of environmental behaviour and favourability towards the EAB. The results show that students’ awareness of the EAB prior to the survey is generally low and allow the categorization of EAB characteristics as either potential drivers or barriers to its adoption. Potential drivers are its simplicity (important driver), eco-friendliness (moderate), pleasant travel experience (moderate), effect on physical health (moderate), and effect on social image (weak), while its barriers are its cost (important), trip timing and routing (important), and safety (moderate). Statistical analyses also found certain characteristics of the students and their commuting situations to be predictors of their EAB favourability, which include their previous experience with EAB’s, awareness and previous experience with kick-style e-scooters, and their backgrounds as either domestic or international students with experience living in different regions of the world. Their environmental behaviour and existing commuting habits were also found to be weaker predictors. Ultimately, this study contributes knowledge on the EAB’s adoption potential from across more kinds of influential factors than usually covered in previous studies, since it used as comprehensive a framework as the IDP model. Its method of evaluating the EAB on multiple aspects of performance also provides a model that can be followed for evaluating and comparing all different options for commuting. Finally, this predictive research provides practical recommendations for promoting EAB adoption among students at a relatively early stage of its emergence into the Canadian market.