Managing the infrastructure gap: perceptions, challenges and strategies in Calgary and Edmonton 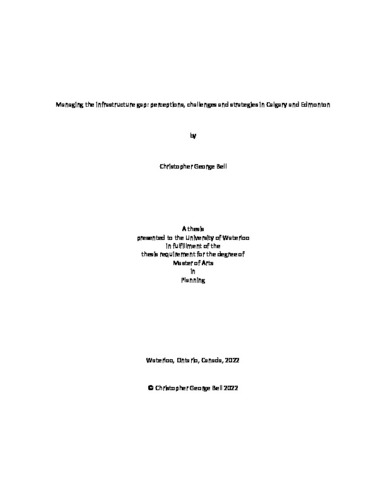 Since the 1980’s, concerns over the municipal ‘infrastructure gap’ or ‘deficit’ have been frequently raised by local governments in Canada and around the world. In response to the limited number of in-depth case studies on this topic, this thesis undertook a comparative analysis of the Cities of Calgary and Edmonton focusing on how these two municipalities understand, view the causes of, and are working to address, their local infrastructure gaps. Municipal councillors and administrators, as well as developer and community representatives, were interviewed to discuss their views on their respective city’s infrastructure gap. Document analysis and descriptive statistics were employed to triangulate findings. This thesis finds that both cities treat their infrastructure gap figures as high-level estimates subject to significant uncertainty and produced, at least in part, to assist with advocacy for increased intergovernmental capital transfers. Participants in both cities identified the following as contributing to their infrastructure gaps: growth and urban form, asset management challenges, political factors, and inadequate revenues. Participants frequently described infrastructure, particularly maintenance and renewal, as being “not sexy” politically and therefore difficult to adequately prioritize. Both cities exclusively report funding gaps for tax-supported (e.g., roads, public transit) infrastructure; neither city reports funding gaps for user fee-funded infrastructure (e.g., water utilities, waste and recycling). Despite this, no participant identified (the absence of) pricing as contributing to infrastructure gaps. This thesis also finds that both case cities have, particularly in the last two decades, exerted substantial effort to improve their capital budgeting and asset management processes to optimize limited funding. Both cities’ strategies correspond with understood causes of infrastructure gaps and include improved asset and growth management practices (particularly related to cost modeling), development of capital prioritization methods, cultivation of dedicated revenue streams (including earmarked property tax increases and development charges), and advocacy for increased intergovernmental transfers. In response to the above, the following recommendations are made: a national framework should be developed to monitor municipal service levels and associated service costs; municipalities should continue to improve their understanding of capital costs associated with urban growth and proper asset management; municipalities should improve the transparency of their capital budgeting and prioritization decisions; provinces should provide large, urban municipalities with additional own-source revenue tools to better respond to their infrastructure needs; and municipalities should seriously assess the feasibility of introducing pricing (e.g. road tolling) to fund needed infrastructure.