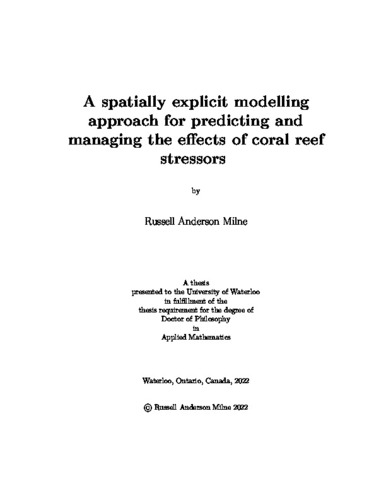 Coral reefs represent simultaneously one of the most beloved and one of the most endangered ecosystems in the world. Millions of people visit coral reefs every year for tourism purposes, and millions of people living in areas adjacent to reefs have reef fish as a key part of their diet, but both of these important services provided by reefs are under threat by anthropogenic stressors. These include overfishing, which is known to cause regime shifts to an equilibrium dominated by macroalgae instead of coral; nutrient loading, which facilitates greater nutrient uptake by macroalgae, allowing them to overgrow coral; sedimentation, in which coral and algae alike become smothered by particulate matter, leading to food web disruption; and many others such as ocean warming and acidification due to climate change. Outbreaks of crown-of-thorns starfish (CoTS), a fast-acting coral predator, are also projected to become more serious in the future, as more CoTS larvae survive at elevated nutrient concentrations. Due to the large number of reef organisms (including many coral species, macroalgae, and CoTS) that reproduce by dispersing their larvae into the ocean, the fact that sedimentation can be caused by soil erosion many miles inland, and the spatial variation in fishing pressure and nutrient input that arises from different human land use patterns, these reef stressors are explicitly spatial in nature. As the large spatial scales that coral reef dynamics take place on make comprehensive field studies expensive in money, time, and labour, determining optimal strategies for managing these stressors cannot rest on field work alone. In this thesis, we build and parametrize three spatially explicit mathematical coral reef models of intermediate complexity, and use these to produce ecological predictions and conservation recommendations for reefs with high levels of anthropogenic stress. We show that coral and herbivorous fish populations respond to fragmented habitats induced by overfishing in opposite ways, and that spillover from marine protected areas can sustain herbivorous fish populations even in heavily overfished areas. We demonstrate that local economic transitions from fishing to tourism can facilitate larger-scale recovery first of fish and subsequently of coral within approximately 30 years. We show that on reefs experiencing CoTS outbreaks, slight increases in fishing and nutrient loading rates could cause sharp transitions to states with less coral and continuous CoTS presence. We predict how future CoTS outbreaks would affect coral cover on reefs adjacent to two growing cities (Cebu City, Philippines and Jeddah, Saudi Arabia), and evaluate four strategies for CoTS management in these cities. We evaluate the resilience of reef fish in four different functional groups to sedimentation caused by deforestation, as well as the robustness of reef fisheries to decline in fish stock stemming from deforestation, and show that flexible harvesting strategies can mitigate this decline. Our work joins novel ecological theory with concrete recommendations for reef ecosystem management, and represents a substantial step forward for understanding marine spatial dynamics.