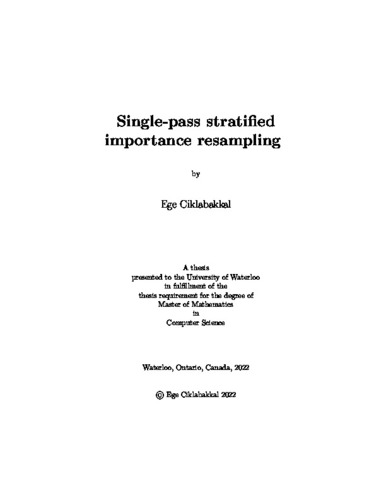 Simulating the behavior of light to produce realistic images involves evaluation of difficult integrals. Monte Carlo integration is a general method to estimate such integrals and is therefore widely used in physically based rendering. Being a stochastic method, it requires generation of random samples and evaluation of the integrand at those samples. This process can be computationally expensive, especially when samples need to be generated from arbitrary distributions and the scene is complex. When the number of samples used in the estimation is inadequate, the resulting renderings are not converged and contain (white) noise. Much effort has gone into investigating ways to efficiently reduce this noise. In this thesis, we focus on a particular method to reduce the noise called resampling, point out its deficiencies, and propose novel procedures to efficiently address them. Resampling is the process of selecting from a set of candidate samples to achieve a distribution (approximately) proportional to a desired target. Recent work has revisited its application to Monte Carlo integration, yielding powerful and practical importance resampling methods. One drawback of these methods is that they cannot generate stratified (more evenly distributed) samples efficiently. There are two main reasons for the lack of stratification: first, the discrete sampling method used for resampling fails to preserve the stratification; second, resampling doesn't consider the placement of high-dimensional candidates in their domain. For the first issue, although the common inverse cumulative distribution (CDF) sampling is successful in maintaining the stratification, the method requires a precomputation step where a data structure is built before the sampling step. We instead propose a novel algorithm which yields the same result as conventional inverse CDF sampling, in a single pass over the candidates. The algorithm traverses the candidate list adaptively from both ends, without needing to store them. For the second issue, we introduce an ordering among the high-dimensional candidates by generating them along a space-filling curve. Aside from stratification, we also show how blue-noise error distribution can be achieved for better perceptual quality. The resulting method is showcased on various resampling-based rendering problems.