Perception of Probabilities which are Subject to Change 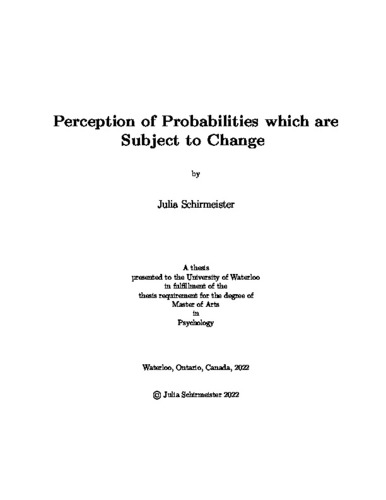 To navigate stochastic and changing environments, people need to keep track of ongoing probabilities as those probabilities are subject to change. Two distinct theories of mental-model updating are compared. In trial-by-trial updating models, every sample is immediately integrated into a working estimate of the probability. In change-point detection, a single estimate of the probability is maintained until evidence accumulates to reject that model to adapt a new model. Disentangling these theories of updating frequencies has been difficult due to a confound found in previous tasks. Participants have been given their last response as their default response, and this has made it easier for them to maintain the same estimate rather than update it. This favours change-point models. To address whether response-maintenance is due to the extra effort it takes to update a response, participants were separated into two groups. In the Automatic condition, participants were given their old response as default. In the Manual condition, participants were given no default and were asked to generate a new estimate of the probability every trial. While offering a default response was found to partially explain response maintenance in previous tasks, it did not fully explain it. Participants in the Manual group showed spontaneous meticulous response maintenance over long series of trials despite being asked to respond anew every trial. This suggests that the hypothesis-testing strategy developed in the change-point detection literature is a fundamental component of probability estimation and is not an artifact of previous task designs.