When our co-workers share their unfair experiences, do we believe them? Perceptions of workplace fairness are negatively related to perceived credibility of coworkers’ claims of injustice 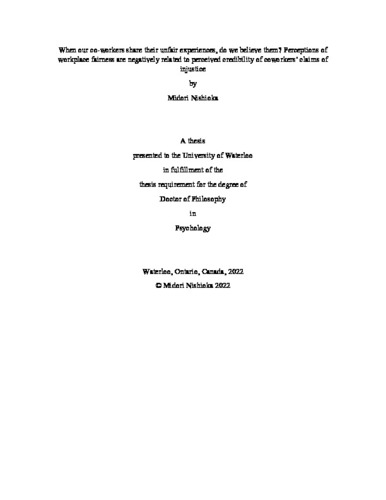 Prior research shows that when observing a co-worker being treated unfairly, employees who are third parties to the incident feel angry and want to punish the perpetrator. However, research has focused on situations in which third parties have unambiguous information about the unfair incident, such as when they witnessed the incident directly. I argue that in many situations, third parties merely hear a co-worker’s claim about an unfair experience, which often provides ambiguous information about the incident. To compensate for ambiguity, I argue that third parties rely on their perceptions of their organization’s overall fairness when interpreting a claim, such that the more they perceive the organization to be fair, the less credible they perceive the claim to be. Across five studies using correlational and experimental designs, I found that third parties’ overall justice perceptions negatively affected their perceptions of claim credibility. In turn, perceived claim credibility was positively related to subsequent reactions, including anger and intentions to punish the accused and support the claimant. Consequently, the more third parties perceived their organization to be fair, the less they reacted to a claim of unfairness. However, the negative effect of overall justice on perceived claim credibility was reduced when third parties had unambiguous information about the incident. Although prior research has focused on beneficial effects of employees’ justice perceptions, I show that there can also be harmful effects. Thus, even if an organization is generally fair, its leaders must remain vigilant to ensure that victims of injustice receive proper support.

Midori Nishioka (2022). When our co-workers share their unfair experiences, do we believe them? Perceptions of workplace fairness are negatively related to perceived credibility of coworkers’ claims of injustice. UWSpace. http://hdl.handle.net/10012/18613