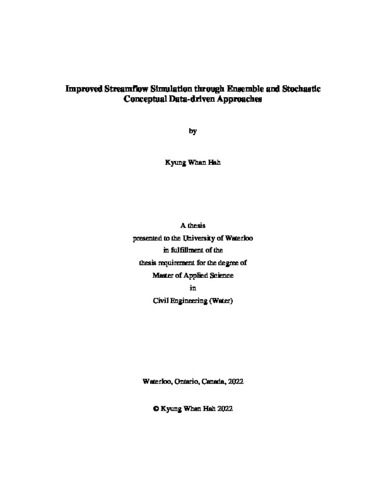 To better understand the complexities of water movement on earth, hydrologists have developed process-based hydrological models (HMs) and data-driven models (DDMs), both of which have been applied to a host of water resources applications (e.g., flood forecasting, reservoir operations, drought monitoring, hydraulic design). HMs attempt to simplify hydrological processes of interest (e.g., snowmelt, sub-surface flow), while DDMs estimate statistical relationships between explanatory/input and response/target variables using historical data. Traditionally, HMs and DDMs have been developed independently, however, there has been growing interest in using DDMs to improve HM simulations. Among various approaches for combining process-based theory with DDMs, the conceptual data-driven approach (CDDA) was recently proposed, where DDMs are used to correct the residuals (errors) stemming from ensemble HMs. The CDDA was shown to substantially reduce the simulation uncertainty. Since the CDDA only accounts for the HM parameter uncertainty, a subsequent study introduced the stochastic CDDA (SCDDA) to account for various sources of uncertainty (i.e., input data, input variable selection, parameters, and model output). However, the (original) SCDDA used HMs as input to the DDMs within a stochastic framework, thus, estimating the uncertainty of the DDMs, not the CDDA. Here, a new SCDDA is introduced where the CDDA uncertainty is estimated instead of the DDM uncertainty (as in the original SCDDA) by taking advantage of the multiple parameter sets generated by the CDDA through a stochastic framework. Hence, the new SCDDA serves as the second stage in post-processing HMs, where the stochastic framework can be used to improve the CDDA simulations. The new SCDDA is tested in a daily streamflow simulation case study using three Swiss catchments where it is benchmarked against the CDDA as well as ensemble and stochastic HMs. In total, nine HM-DDM combinations (variants) are explored within the CDDA and SCDDA based on three popular HMs and three state-of-the-art DDMs. The ensemble and stochastic HMs are based on the same three HMs used in the CDDA and SCDDA. A total of 34 years of daily streamflow, precipitation, maximum, minimum, and mean air temperatures, and potential evapotranspiration time series were partitioned into warm-up, calibration/training, validation, and test sets for model development and assessment. Several deterministic (mean absolute error, root mean squared error, Nash Sutcliffe Efficiency, Kling Gupta Efficiency (KGE), and percent bias) and probabilistic (mean continuous ranked probability score (CRPS), alpha index (α_R), and average width) performance metrics, as well as graphical tools (e.g., time series plots, raincloud plots, coverage probability plots (CPP)), were used to assess the simulations and compare the various models. The CDDA improved the CRPS of the ensemble HM by 18-69%, and the new SCDDA further improved the CRPS of the CDDA by up to 15%. However, it was found that the SCDDA could not improve the reliability of any CDDA variants that had an α_R above 0.85. Since the computational requirements of the CDDA and SCDDA can be significant, the effect of ensemble size on model performance was analyzed and revealed that approximately 100 (ensemble) members, for both ensemble and stochastic models, could be used without sacrificing performance. Finally, to test whether the CDDA and SCDDA can account for important processes missing within an HM, both approaches adopt an HM with and without a snow routine and are tested in a snow-driven catchment. It is found that both cases (with and without snow) had negligible difference in performance suggesting that the CDDA and SCDDA may account for missing processes in HMs.