Does the Cost Barrier to Contraception Differentially Affect Racialized and Indigenous Women? An Intersectional Quantitative Investigation 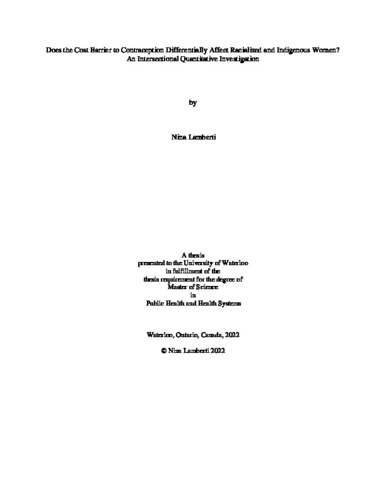 Background: In Canada, 15% of sexually active women of reproductive age do not use any form of contraception (Black et al., 2009; Black, Guilbert, Costescu, et al., 2015; Black, Guilbert, Hassan, et al., 2015). The majority of women who do use contraception rely on methods with high failure rates such as condoms only and withdrawal (Black, Guilbert, Costescu, et al., 2015). The most effective forms of birth control, long-acting reversible contraception (LARCs), are underutilized and often the most expensive per unit (Black, Guilbert, Costescu, et al., 2015; Di Meglio & Yorke, 2019). Research has shown that racialized and Indigenous women often have different experiences and barriers to reproductive health care compared to non-racialized and non-Indigenous women (Sutton et al., 2021; Wilson et al., 2013). One factor, cost, has been identified as the most important barrier to using effective contraception (Black, Guilbert, Hassan, et al., 2015; Hulme et al., 2015). Specific Aims: Using data from the 2020 Annual Component of the Canadian Community Health Survey (CCHS), this thesis investigates two major questions (1) “Are racialized and Indigenous women less likely to use more expensive and effective forms of birth control than non-racialized and non-Indigenous women?” and (2) “Do differences in contraception use by racialized and Indigenous women, compared to non-racialized non-Indigenous women, appear to be due primarily to financial or cost barriers?”. Methods: Exploratory data analysis was first conducted in order to present univariate and bivariate distributions of predictor and outcome variables. Bivariate associations included Chi-square tests to examine significance at p >0.05. Three sets of multi-variable binary logistic regression models were then used to assess relationships between outcome and predictor variables. The first set of models examined the binary outcome of Use vs. Non-use, while the second set of models examined LARC contraception use from the sample of women who did use birth control. The last model investigated Use vs. Non-use of contraceptives among specific racial categories. Results: A large proportion (52.85%) of racialized women reported not using any form of birth control compared to 22.68% of white women and 20.97% of Indigenous women. Higher proportions of racialized women relied on condoms (62.03%) compared to Indigenous (32.91%) and white (35.15%) women. In the first group of binary regression models, racialized women were found to be significantly less likely (OR = 0.766, CI = 0.617, 0.951) to use contraception of any kind regardless of income, education or provincial location. Of the women who reported using contraception, racialized women were found to be significantly less likely (OR = 0.546, CI = 0.365, 0.816) to use LARC forms of birth control. In both sets of models, Indigenous women were not significantly different from white women. In a sub-analysis of only racialized women, Filipino women were found to be significantly less likely (OR = 0.297, CI = 0.129, 0.683) to use birth control of any kind. Conclusion: The findings suggest that the relationship between identity category and contraception use is not fully explained or even impacted by socioeconomic elements such as income and education. These results emphasize the need for further exploration of disaggregated race data pertaining to reproductive health inequities. The results also provide recommendations for Canadian health policy modifications in order to improve contraception access and use among potentially vulnerable populations.