Exploring the Drivers of, and Potential Interventions to Reduce, Antimicrobial Resistance in the European Food System Context 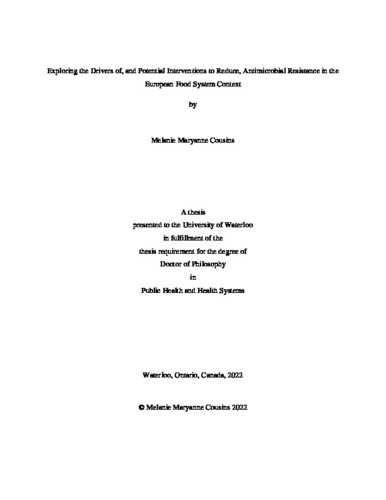 Antimicrobial resistance (AMR) is a growing One Health problem that has become one of the leading causes of death worldwide. AMR emerges from a complex system characterized by multiple interacting factors across the human-animal-environment spectrum, all of which have the potential to be impacted by the effects of climate change. This thesis aimed to explore the drivers of AMR and assess potential interventions to reduce AMR in the Swedish food system context under potential climate change conditions. This thesis had four main objectives, to: 1) identify the quantitative and qualitative data needed to create and parameterize a simulation model of AMR emergence and transmission within the Swedish food system; 2) create and use a simulation model to test the potential ability of selected interventions to reduce AMR in the food system; 3) assess the sustainability of these interventions under climate change;, and 4) outline a systematic approach for creating mixed methods models for complex public health issues. The structure of the simulation model was based on an expert-derived causal loop diagram (CLD), created by Swedish and European AMR experts during a previously conducted participatory modelling workshop, that contained 91 nodes and 331 relationships deemed important to the development and spread of AMR within the Swedish food system. To determine if there was adequate information to create and parameterize the simulation model of AMR, a scoping review was conducted. This review identified 140 existing models and data from 414 sources to inform 64 of the major nodes within the CLD. The identified models addressed the main parts of the system (e.g., agriculture and farm transmission, antimicrobial use (AMU) and AMR, supply and demand for food); however, there was limited connection between the different areas of the food system. Nodes on the outer edges of the CLD did not have data, nor were they included within the scope of the models identified in the scoping review. Other data gaps included the environmental sector and wildlife. To further refine and parameterize the simulation model, semi-quantitative statements referring to the state of the nodes and relationships in the CLD were extracted from the transcripts from the prior participatory workshop. Transcript analysis identified 83 nodes, 48 of which were included in the CLD, and 35 were new nodes that emerged during the analysis or were existing nodes that were merged or divided. Based on the data requirements of the models identified via the scoping review, and the data currently available, it was not possible to create a fully quantitative model without including many assumptions. Therefore, the CLD was used as the base structure of a fuzzy cognitive map (FCM) of the Swedish food system, which was refined and parameterized by the data from the scoping review and transcript analysis. The final FCM contained 90 nodes, and 491 relationships. The use of FCM allowed for the evaluation of eight interventions under predicted climate change conditions, however, none of them were able to significantly reduce AMR in the system. Finally, the entire processes was reflected upon, including steps taken, challenges and mitigation strategies, and recommendations for future research in systems approaches for modelling complex systems and public health problems. In conclusion, this thesis identified that it was not feasible to create a purely quantitative model of AMR within the Swedish food system due to data limitations. However, by using data from the literature and experts’ tacit knowledge, an FCM of the system provided an innovative way to analyze the complex system, provided invaluable insight into the behaviour of the system, and aided in scenario analysis from a broader systems lens.