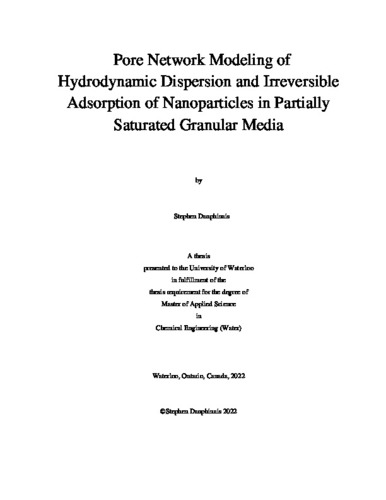 The transport of nanoparticles in porous media, whether deliberate or accidental, is of critical importance in several fields including migration of contaminants, wastewater clean-up, and enhanced oil recovery. Pore scale models that determine the fate of nanoparticles can be advantageous compared to continuum models as they are able to account for various phenomena that occur at the pore scale and are controlled by the interaction between nanoparticles and solid-fluid or fluid-fluid interfaces. These phenomena include hindered diffusion, size exclusion, adsorption, deposition and erosion, to name a few. Here a Eulerian pore scale model is built using OpenPNM, and simulations are performed on a pore network based on a column packed with spherical beads. This pore network is extracted from a voxel image using PMEAL’s SNOW algorithm, and it is found to accurately represent key properties of a real packed column, namely the permeability, tortuosity, and capillary breakthrough pressure. The resulting pore network model is used to investigate two aspects of nanoparticle transport that have so far received limited attention. One aspect concerns the effects of hindered diffusion and velocity profile exclusion on nanoparticle dispersion in saturated porous media. The other aspect concerns the irreversible adsorption of nanoparticles on trapped immobile non-wetting phase ganglia present in partially-saturated porous media. The longitudinal dispersion coefficient is determined by simulating transient advection and diffusion in the pore network, introducing either a pulse or step-change injection, and then fitting analytical solutions to the resulting elution curve. Both pulse and step-change injections fit well with the corresponding analytical solution, but step change injections are more accurate. Pore network simulations aimed at reproducing the experiments of Chrysikopoulos and Katzourakis (2015) show that hindered diffusion and velocity profile exclusion do not explain the experimental observations, as hypothesized by the authors. It is found that nanoparticle size influences the dispersion coefficient or the effective particle velocity only when the ratio of particle to bead (solid grain) size is sufficiently high (greater than about 0.01). When this ratio is sufficiently high the nanoparticles experience an earlier breakthrough due to the velocity profile exclusion. It was also determined that hindered diffusion plays a significant role only when the Peclet number is less than 10. Irreversible adsorption of nanoparticles onto aqueous-non aqueous phase interfaces is also simulated. The non-wetting phase interface is created by running an invasion-percolation algorithm on the pore network. The adsorption constant is taken to be a function of the maximum energy barrier to adsorption and a blocking function, and the total fluid-fluid interface area is determined using the pores occupied by the non-wetting phase but connected to the water phase. This method is found to provide a reasonable prediction for what the surface area of the non-wetting phase is by comparing it to real-world simulations. It is shown that information such as whether blocking is occurring can be inferred based on the shape of the breakthrough curve under certain conditions. Further, it is shown that smaller particles increase the rate of adsorption. When the Damkholer number is much greater than 10 the rate of adsorption is transport limited, and when the Damkholer number is much less than 10 the simulation is limited by the energy barrier to adsorption.