Complexity of Sublinear Algorithms for Convexity in Higher Dimensions 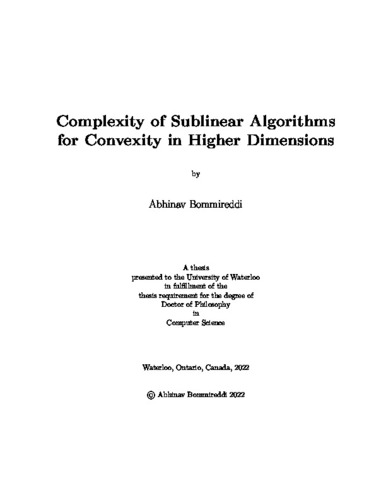 Convexity plays a prominent role in both mathematics and computer science. It is defined for sets and functions, and many related problems can be solved efficiently if the set/function is convex. In this thesis, we focus on three problems related to convexity where we don't have that guarantee. The first problem we consider is the decision problem: is a given unknown set convex? We study it under the framework of property testing. In property testing, instead of distinguishing objects that satisfy the property from the ones that do not, we distinguish objects that satisfy the property from the ones that are ``far" from satisfying the property. We approach the problem of testing convex sets by studying a closely related problem of robust characterizations of convex sets, in which we study different characterizations of convex sets and determine their robustness. We say a characterization is robust, if sets that are ``far" from convex are also ``far" from satisfying the characterization. We examine the robustness of three characterizations of convex sets: line characterization, convex hull characterization and supporting hyperplane characterization. Furthermore, we discuss the implications of the robustness/non-robustness of these characterizations on the testing problem. The second problem we consider is the decision problem: is a given unknown function over the hypergrid [n]^d convex? The function is given via a valuation oracle, which we query to get the function value. We study this problem also under the framework of property testing. We refer to an algorithm that performs the testing task as non-adaptive if it submits all its queries before looking at the function value on any of the points, and adaptive otherwise. We show that any non-adaptive algorithm that tests convexity of functions f: [n]^d → ℝ for d ≥ 2, has query complexity that is linear in n and exponential in d. To understand if adaptivity helps, we consider the problem of testing convexity of functions over a stripe, [3] ⨉ [n], and show that there exists an adaptive testing algorithm that does exponentially better than any non-adaptive one. The third problem we consider is minimizing convex functions over the hypergrid when given access to the comparison oracle to the function on the points in the hypergrid. The comparison oracle to a function takes as input two points and determines which of them has the smaller function value. The discrete (non-convex) nature of the domain makes the problem challenging, since we do not have the property that local minimum implies global minimum, which is crucial for the minimization of convex functions over continuous domains. We, however, show that there is a minimization algorithm in two dimensions with polynomial time and query complexity, and for any constant dimension greater than two, there is a minimization algorithm with quasi-polynomial time and query complexity.