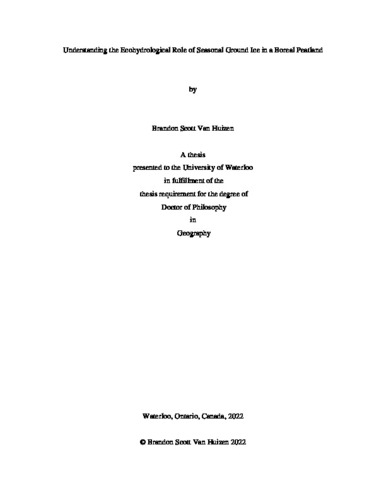 Seasonal Ground Ice (SGI) in peatlands forms in late fall when air temperatures begin to cool, and water in peat pores freeze. It differs from permafrost peatlands in that the SGI freezes and completely melts away every fall and subsequent winter. Despite its presence in many boreal peatlands, the ecohydrological impact it has on peatland processes has been largely understudied. Large amounts of SGI require significant energy inputs every spring to melt completely, potentially reducing available energy for evapotranspiration. This is of particular importance in the Western Boreal Plains (WBP), where precipitation is often exceeded by potential evapotranspiration annually, creating a sub-humid climate. Despite this dry climate, peatlands comprise a large proportion of the landscape. Their persistence is attributed to various negative feedbacks that help reduce water losses. The melting of SGI may be one such negative feedback. Furthermore, the presence of SGI can have a profound impact on the spring freshet, influencing the peatland’s role as a source or sink of water within the landscape. Despite the potential for SGI influence on peatland ecohydrological processes, it is not well represented in SVAT models. However, properly parameterizing these effects is complicated by the apparent small scale spatial heterogeneity in SGI melting as well as the presence of bi-directional melting during the spring thaw. Finally, incorporating these processes into a model are further complicated by the poor representation of moss evaporation in such models. Therefore, the purpose of this thesis is to establish a conceptual understanding of the ecohydrological role of SGI in peatlands within the WBP and begin to incorporate some of these processes into the Cold Regions Hydrological Model (CRHM). This study took place at a Boreal fen peatland (named Pauciflora), approximately 40 km south of Fort McMurray on the Stoney Mountain complex. The conceptual role of SGI was assessed through in-situ measurements of SGI both directly by probing with a steel rod, and by proxy via ground temperature probes, and comparing trends in SGI melting with near surface soil moisture (0-5cm), water table position, and site scale potential and actual evapotranspiration (PET & AET respectively). The findings from this study indicated that the melting of SGI can reduce available energy for evapotranspiration, lowering the maximum PET for a given set of meterological conditions, reducing PET by 10 mm over the melt period. As SGI melts, it re-releases a substantial amount of liquid water (139 mm), suggesting that as it melts, it can help contribute to their role as water sources for downstream systems, as it forms a concrete ice layer at the surface, reducing the infiltrability of the soil. However, it was found that the melting of SGI was highly spatially variable, and to properly be represented in a model, the spatial variability of melting SGI impact on PET needed to be evaluated. This was completed by conducting extensive SGI surveys during the spring, at both small (around individual trees, <0.5 m) and large scale (5 m). The spatial variability was assessed using cluster analysis, and it was found that the spatial variability was not a function of melt rates, but rather ice thickness, which in turn was controlled by proximity to individual trees, and basin morphology. Furthermore, the spatial variability of PET was determined to be a function of net radiation, and not SGI, which helps to simplify modelling approaches. Another facet of SGI that was looked at was the importance of bi-directional melt in SGI. Using the Stefan’s Equation, a bi-directional melting modelling exercise was run, and found that incorporating this process, improved model prediction and the estimation of the timing of ice-free conditions, which is important when modelling the spring freshet. In addition to this role, the potential impact of a warming climate was assessed, and found that the SGI role in peatlands may shift, as thinning layers of SGI formation, and more frequent freeze/thaw cycles, may lead to less water leaving the peatland. This has implications for downstream systems, that rely on head water catchments for water sources. Finally, evapotranspiration methods used in peatlands often assume that moisture is not a limiting factor. The final portion of this study evaluated that assumption and found that while using Priestley Taylor provided similar results to the Penman Monteith equation in calculating evapotranspiration, it required expensive onsite instrumentation to properly parameterize it to achieve such results. Conversely, the Penman-Monteith equation does not require such instrumentation, however the resistance term used in it, is difficult to parameterize for moss. A first attempt at incorporating a physical representation of moss resistance into the model was attempted. However, validation proved difficult due to a lack of conditions where moss resistance might be present at Pauciflora. The findings also indicated that there is a high degree of uncertainty around estimating moss resistance and that future work should continue to focus on its inclusion into models.