Baring Your Soul: The Good, the Bad, and the Bad Again 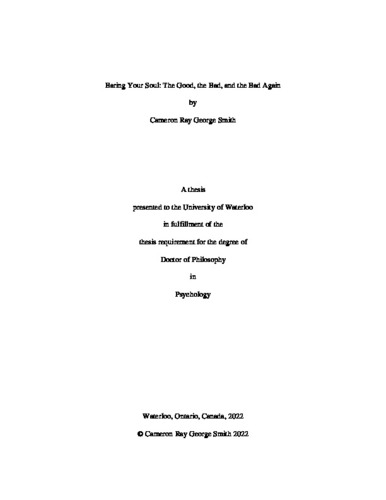 People with lower self-esteem (LSEs) exhibit a paradoxical pattern of self-disclosure (Wood & Forest, 2016). On one hand, they self-disclose less overall than people with higher self-esteem (HSEs), seemingly to protect themselves from possible criticism or rejection. On the other hand, when LSEs do self-disclose, they make more negative disclosures—focusing on negative events, experiences, or emotions--which other people often do not like. Why would LSEs disclose so much negativity if they are usually self-protective? We proposed that LSEs disclose a lot of negativity because they do not understand that their negativity is problematic. Across three studies, we examined LSEs’ perceptions of how their frequency of negative disclosures compares to that of others, as well as LSEs’ understanding of the potential negative consequences of negative disclosures. Results showed that: (a) LSEs report making more negative disclosures, and being more negative overall, relative to the norm than HSEs do (b) both LSEs and HSEs expected others to react less favorably to negative disclosures than to positive ones, and (c) compared to HSEs, LSEs expected less favorable reactions to all disclosures. These studies suggest that LSEs do, in fact, understand both that they express more negativity than is typical and that their negativity is generally not well received. Yet LSEs persist in making negative disclosures nonetheless, which leaves the paradox still unexplained. Although the paradox remains to be resolved, we have effectively ruled out two plausible explanations for LSEs' negativity and narrowed the focus for future investigations.