The relationship between online gaming and wellbeing among post-secondary students 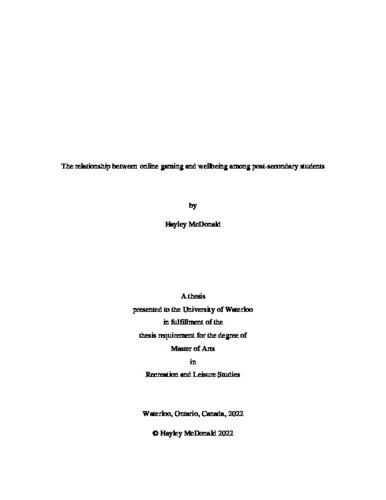 As the “fastest growing form of entertainment in the world” (Tran, 2019, p. 76), gaming has become a significant part of our society (Groening & Binnewies, 2019). Considering its widespread popularity as a leisure activity amongst adolescents and adults (Entertainment Software Association of Canada, 2020), it is unsurprising that multiple studies have explored its relationship to the player’s wellbeing. Previous research has found mixed findings regarding gaming’s impact on wellbeing. Several findings have identified gaming as a way to relieve stress, relax (Russoniello et al., 2009; Snodgrass et al., 2011; Wack & Tantleff-Dunn, 2009), positively influence aspects of social wellbeing (Gitter et al., 2013; Kowert & Oldmeadow, 2015; Martončik & Lokša, 2016) and is associated with a variety of improvements in psychological and physiological functions (Ryan et al., 2006). Despite these benefits, numerous other findings have associated gaming with negative outcomes such as interfering with a player’s social functioning, wellbeing, and adjustment (Grüsser et al., 2007; Stockdale & Coyne, 2018; Weinstein, 2010). Given these apparent contradictions in previous literature, further exploration needs to be conducted in understanding the relationship of gaming and wellbeing among post-secondary students. To examine this relationship, additional factors that can impact one’s wellbeing should be considered such as the motives for engaging in their leisure pursuits, one’s feelings of connection and support from others in the community, and the breadth of activities one engages in. The purpose of this study was to explore the relationship between gaming and wellbeing among post-secondary students while taking into account the player’s motivation, social connectedness, and overall leisure repertoire. A secondary data analysis was undertaken using data (n = 982) gathered from the Georgian College Student Wellbeing Survey launched in January 2019 conducted by the Canadian Index of Wellbeing (CIW). Multiple factors were considered in exploring the relationship to wellbeing including the students demographic characteristics (age, sex, student status). Students identified the frequency and intensity of their gaming, a measure of their leisure repertoire was calculated, and the degree to which they were socially motivated to participate in their leisure assessed. Three different measures were used to assess social connectedness: (1) number of close friends, (2) feelings of social isolation, and (3) sense of community (i.e., social climate and bonds). Finally, as a measure of their subjective wellbeing, students rated their life satisfaction along an 11-point scale. The findings indicated that neither whether students participated in gaming nor their intensity of gaming were significant factors in explaining wellbeing. Instead, social factors (feelings of social isolation and perceptions of social climate and bonds) and leisure repertoire were particularly significant factors in explaining their wellbeing. Reducing feelings of social isolation emerged as the most important factor in explaining wellbeing irrespective of how intensely or how often students participate in gaming. Ultimately, social context is the most important factor in explaining variations in wellbeing, above and beyond other factors including gaming participation and intensity.