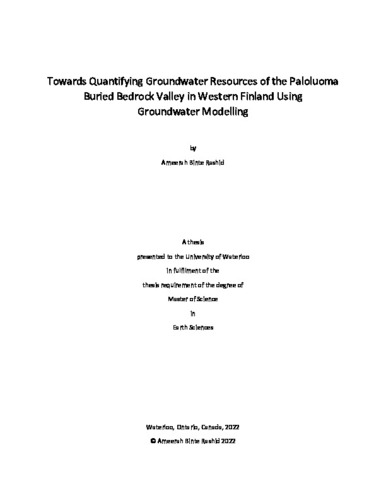 Groundwater provides about 60 percent of drinking water in Finland. In western Finland, drinking water for the town of Kurikka (pop. ~21 700) comes from glaciofluvial aquifers confined underneath thick glaciomarine aquitards along structurally-controlled bedrock valleys. One such valley is called the Paloluoma Buried Bedrock Valley (BBV) – an area that experiences a subarctic climate with no dry season and cool summers. The nearby town of Vaasa (pop. ~70 000) currently uses river water, which is more prone to near-surface sources of contamination than groundwater. As such, Vaasa intends to get its water supply from the same aquifer as Kurikka, especially because the aquifer of interest is seemingly highly productive. With increased interest and demand, it is important to understand key hydrogeological characteristics of the Paloluoma BBV aquifer system, its flow dynamics, and response to pumping in order to assess its sustainable exploitation rate. Such an assessment of the groundwater system has yet to be completed for this region. Hence, research on key hydrogeological characteristics and behaviour of the groundwater system is necessary to determine sustainable usage and develop plans to better protect and manage this groundwater resource. An understanding of groundwater systems is commonly developed by coupling a conceptual model with a flow model. The conceptual hydrogeological model of the Paloluoma BBV aquifer system was developed using methods such as water balances and pumping test analyses, which estimate hydraulic parameters such as groundwater recharge and hydraulic conductivity, respectively. The conceptual model also includes the 3D subsurface hydrostratigraphic structure consisting of a series of aquifers and aquitards for a total of 14 sedimentary hydrostratigraphic units (HSU) and bedrock. Important hydrogeological characteristics based on the conceptual model include the lack of groundwater interaction between surface water bodies and subsurface units, the delineation of spatial recharge on the basis of surficial geology where good recharge zones are found along raised Holocene beach ridges and topographic highs, indication of aquifer behaviour as confined and leaky, and local flow pathways indicating interaction between shallow and deep aquifers. The conceptual model is the foundation and framework of the groundwater flow model as it is an amalgamation of key processes and parameters of the Paloluoma BBV groundwater system. From the conceptual model, parameters are applied to the flow model, which is constructed using a finite element numerical model grid and set up as a fully saturated and confined aquifer system. The calibrated model parameters include a recharge rate of 50 mm/a, hydraulic conductivity of aquifers ranging within 10-4 ms-1 to 10-3 ms-1, hydraulic conductivity of aquitards at a magnitude of 10-7 ms-1, hydraulic conductivity of bedrock gradually decreasing with depth from 10-7 ms-1 to 10-10 ms-1, and bedrock hydraulic conductivity anisotropy (Kh/Kv) of 1000. The flow model is critical to obtain quantitative understanding of the Paloluoma BBV hydrogeological system. To this end, four simulation goals/scenarios were addressed: (1) produce steady-state stabilized conditions, (2) verify the model with field pumping observations, (3) understand where water is coming from and going to, and (4) explore what could be the future maximum sustainable pumping rate of the existing production wells. These scenarios are studied and quantified using rate budgets at specific boundaries of interest. The change and comparison between scenarios at each boundary provided insight into how key areas of the model react to varying pumping rates. Key characteristics derived from the flow model include flow pathways and source areas during groundwater extraction. Specifically, it was found that the pumping well at the center of the study area is likely receiving water from overlying aquifers or underlying bedrock. In contrast, the water extracted from the pumping well at the downgradient south end of the study area is mainly sourced from captured discharge that would have otherwise flowed out of the system in the absence of pumping. While under the maximum pumping scenario (5500 m3d-1), water is drawn from outside the watershed and outflow out of the watershed is reduced, there is no lack of groundwater as even during pumping, flowing artesian conditions in monitoring wells remain present (for the purpose of this thesis, when artesian wells are specified, it is meant as flowing artesian wells). Nonetheless, groundwater production in the valley impacts the adjacent watershed, which must be considered when designing pumping plans. Using conventional flow modelling processes from conceptual model development to numerical modelling, the Paloluoma BBV is characterized and its groundwater resource is successfully quantified. The flow model is a critical tool for the town of Kurikka to aid in making informed decisions surrounding their freshwater resource and further the advancements of their freshwater program.