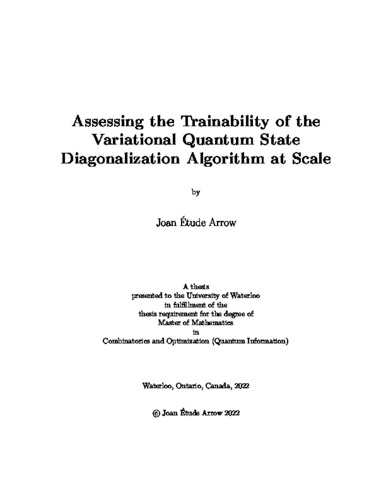 Quantum algorithm development is a famously difficult problem. The lack of intuition concerning the quantum realm makes constructing quantum algorithms which solve partic- ular problems of interest difficult. In addition, modern hardware limitations place strong restrictions on the types of algorithms which can be implemented in noisy circuits. These challenges have produced several solutions to the problem of quantum algorithm development in the modern Near-term Intermediate Scale Quantum (NISQ) Era. One of the most prominent of these is the use of classical machine learning to discover novel quan- tum algorithms by minimizing a cost function associated with the particular application of interest. This quantum-classical hybrid approach, also called Variational Quantum Algorithms (VQAs) has emerged as a major interest for both academic and industrial research due to its flexible framework and existing applications in both optimization and quantum chemistry. What is still unclear, is whether these algorithms will work at scale in the noisy training environment of the NISQ era. This is mainly due to the phenomenon of exponentially vanishing training gradients, commonly referred to as the Barren Plateaus problem, which prevents training of the classical machine learning model. Recent results have shown that some types of cost functions used in training result in Barren Plateaus, while others do not. This cost function dependence of barren plateaus has implications for the entire field of VQAs which appear to be relatively unexplored thus far. In this thesis I revisit a 2018 paper my collaborators and I published, which established a new Variational Quantum State Diagonalization (VQSD) algorithm, and demonstrate that this algorithm’s cost function will encounter a Barren Plateau at scale. I then introduce a simple modification to this cost function which preserves the function of VQSD while also ensuring trainability at scale.