Construction and characterization of a hybrid bacteriophage gene delivery platform 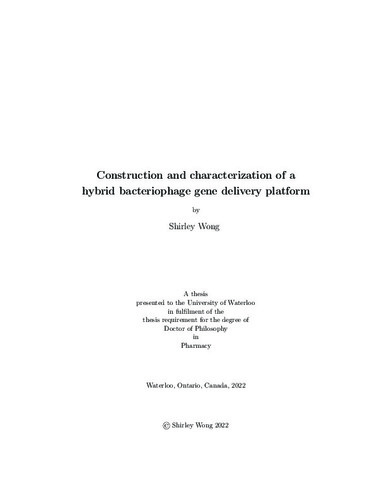 Bacteriophages, viruses that specifically infect bacteria, may be considered as structurally simplistic protein-based vehicles for ferrying nucleic acid cargo. Since phages cannot infect nor replicate within human cells, they can be used for non-viral gene delivery. The filamentous phage M13 is a single-stranded DNA phage that co-exists with its host after infection. M13 possesses several attractive characteristics for gene delivery: 1) high titres of phage progeny, 2) capsid proteins amenable to display of foreign peptides to modify tropism, 3) a simple, well-characterized genome that is easy to genetically modify, and 4) a flexible, theoretically limitless transgene cargo capacity. Although non-viral vectors may be safer than vectors derived from infection-competent human viruses, they overall suffer from a lack of efficacy due to the absence of innate pathways for mammalian cell uptake and gene expression. Bacterial sequences in conventional gene transfer plasmids and in phage genomes often consist of elements only necessary for amplification in a prokaryotic background, and as such, are superfluous in the mammalian cell. These problematic elements include antibiotic resistance genes, which can disseminate antibiotic resistance, and CpG motifs, which are inflammatory in animals and can lead to transgene silencing. We examined how M13 could be improved as a gene delivery vector by removing its phage backbone in conjunction with phage display of a cell-specific targeting ligand. As a proof of principle, a mammalian transgene cassette was flanked by isolated initiation and termination elements of the phage origin of replication. Phage proteins provided in trans by a separate helper phage would replicate only the cassette, without any bacterial or phage backbone. Helper phage rescue of “miniphagemids” from these split origins was equal to, if not greater than, isogenic “full phagemids” arising from intact origins. However, helper phage efficiency appears to be highly dependent on host background, as striking differences in phagemid:helper composition were observed between different host bacterial strains. To examine their capacity for gene delivery, we produced mini and full phagemid particles encoding the luciferase reporter transgene cassette and displaying a cell-specific targeting ligand, the epidermal growth factor (EGF). Across cell lines expressing the EGF receptor (EGFR), the display of EGF was the single greatest factor affecting transgene expression, underlining the necessity of targeting receptor-mediated endocytosis for efficient phage uptake. Importantly, smaller vector size was associated with improved transgene expression both for purified single-stranded phagemid DNA and phagemid virion particles. The display of cell-specific targeting ligands improves cellular internalization while the miniaturized phagemid vector improves intracellular localization and evades immune-induced transgene silencing. As single-stranded DNA transfects poorly in mammalian cells, we also set out to construct a double-stranded phage gene transfer vector. We were able to demonstrate helper phage-mediated rescue of double-stranded phagemid DNA. Production of a double-stranded phagemid was highly inefficient, but we identified several key areas for further investigation and improvement. Overall, we characterized the production and function of a novel set of targeted transgene delivery vectors based on the filamentous phage M13. Its capacity for the display of a cell-targeting ligand in combination with the straightforward miniaturization of its genetic cargo showcases the flexibility of M13 as a gene delivery tool with immense therapeutic potential. Altogether, these advancements can further increase the efficiency of M13 phage-mediated gene transfer.