Establishing Legitimacy in the Face of a Dominant Amateur Sport Organization: A Case Study of True Hockey 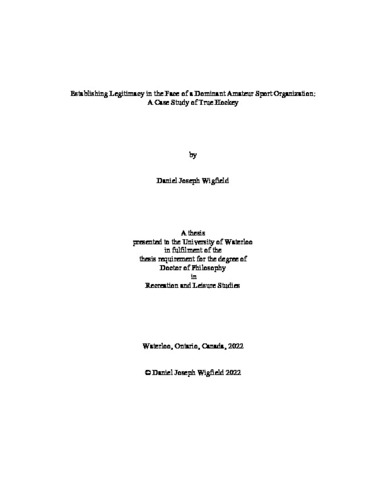 The context of sport is ripe with instances of change, despite the depiction of long-term stability (Washington & Patterson, 2011). Within amateur sport—in particular, youth sport—criticism of the increased standardization and underlying logics that govern it has never been greater. In most contexts, entrepreneurs can enter the marketplace with their own unique operations to serve dissatisfied consumers; however, doing so within an institutionalized sport system has been difficult (Legg et al., 2016). Indeed, powerful national and regional governing bodies rely on coercive pressures to ensure their member community sport organizations (CSOs) remain aligned with their organizational vision and values (Slack & Parent, 2006). To date, little remains known about institutional entrepreneurship as a process of disruption in the amateur sport system, including how and why it develops and persists against significant resistance. Therefore, the purpose of this study was to develop understandings of how new sport organizations can successfully challenge dominant sport organizations, and how they can achieve their own legitimacy within a highly institutionalized system in order to diversify the range of opportunities available to youth participants. Theoretically, this study draws on an institutional work perspective, which explores the mechanisms that actors employ to create, maintain, and/or disrupt institutions (Lawrence et al., 2009). Guided by an instrumental case study methodology (Stake, 1995), this study explored the case of a minor hockey organization (i.e., True Hockey) in Ontario, Canada that has been successful at overcoming barriers to operate independently from the athlete development system established by the sport’s national governing association (i.e., Hockey Canada). True Hockey is one of a few organizations to have provided youth an alternative to Hockey Canada’s highly restrictive development programming (Garbutt, 2018; Radley, 2015). Following its development, True Hockey was identified as a problem by Hockey Canada that it needed to address. Historically, Hockey Canada has invoked a policy that labels organizations like True Hockey as “outlaw leagues” and prohibits participation by anyone associated with these rival organizations (Campbell, 2019). Additionally, Hockey Canada has also shown a tendency to adjust its organizational boundaries to absorb members of “outlaw leagues” to eliminate any threats to its dominance (Kalchman, 2010). Data were collected via interviews with 20 stakeholders of True Hockey (i.e., executives, parents, coaches, managers). Additionally, data were also extracted from organizational documents, promotional materials, and media reports. Documents and interviews were analyzed using abductive reasoning (Dubois & Gadde, 2002). Through an abductive approach, the researcher attempts to explain as much of the phenomenon (i.e., True Hockey’s ability to develop as an organization and achieve legitimacy despite challenges from a dominant organization within the institutionalized sport system) as possible with existing theory while looking for anomalies in the data that may require new explanations (Timmermans & Tavory, 2012). It is through the consistent confronting of theory with the empirical world that a novel advancement of institutional work can be established (Dubois & Gadde, 2002). A relativist approach to trustworthiness was established in accordance with guidance provided by Smith and Caddick (2012). Findings revealed that True Hockey’s key actors have had to navigate four distinct phases of evolution in order to garner support and gain legitimacy within a field that lacks alternatives to program delivery. Specifically, the four phases of evolution that have contributed to the establishment of True Hockey include the Building, Growth, Competition, and Stabilization phases. Each phase is characterized by distinct actions and concepts reflective of the institutional work necessary to launch and maintain a new sport organization. Consistent with existing institutionalization literature, the most effective work performed by True Hockey’s key actors involved the manipulation and control of the organization’s boundaries, practices, and cognitions in order to put pressure on the dominant organizations in the field. Impressively, the embedded nature of Hockey Canada’s logics throughout the hockey community provided the organization an institutional presence that could not be overcome. Thus, to secure the long-term viability of the organization, True Hockey executives and staff made the decision to abandon its success as an independent minor hockey organization to become a sanctioned member of Hockey Canada after 15 years. True Hockey executives and staff deemed the institutionalization process when the organization accepted Hockey Canada membership. Interestingly, the perceptions of both parents and coaches from within True Hockey suggest that the organization’s work with regards to its pursuit of legitimacy remains incomplete. Parents and coaches have and will continue to gauge True Hockey’s legitimacy through the evaluation of its business processes, athlete development programming, and participant experiences. The evolution of True Hockey offers key insights into how a new CSO transitions from start-up organization to legitimate venture within the highly restrictive and regulated sport system. Considering the pressure that many governing bodies in a variety of sports are under to introduce updates to their development systems for youth, the lessons from this case are timely as they show that entrepreneurs are valuable to a sport system because they challenge and debate past ways of doing things in order to create better sport experiences.