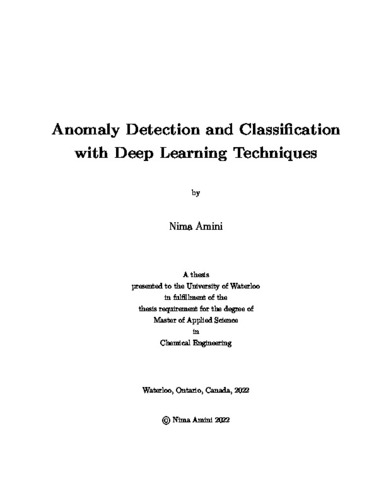 The capability of deep learning (DL) techniques for dealing with non-linear, dynamic and correlated data has paved the way for developing DL-based solutions for real-world problems. Among them, anomaly detection has been received increasing attention due to its wide applications from process safety to video surveillance. Anomaly detection is the task to detect deviations and outliers from normal data, and can be divided into two groups: supervised and unsupervised techniques. In unsupervised techniques, the training data consists of normal data (with or without a small proportion of anomalies), while in supervised techniques it is assumed that labelled data from normal samples and anomalies is available. In this thesis, we propose two techniques for unsupervised and supervised anomaly detection, respectively. Self-adversarial autoencoding classifier (SAAC) is proposed for unsupervised anomaly detection with an end-to-end training phase. SAAC employs an adversarial autoencoder (AAE) as an anomaly generator without having access to real anomalous samples. An autoencoding binary classifier (ABC) is trained to differentiate between the generated anomalous samples by the AAE and the normal samples. AAE and ABC are trained in an adversarial way, and three datasets, namely the Tennessee-Eastman process, Credit Card, and CIFAR10, are utilized to demonstrate its superiority over other existing techniques in terms of anomaly detection. As a supervised technique, a two-step technique for fault detection and diagnosis (FDD) is proposed. A source-aware autoencoder (SAAE) is proposed as an extension of autoencoders to incorporate faulty samples in their training stage. In SAAE, flexibility in tuning recall and precision trade-off, ability to detect unseen faults and applicability in imbalanced data sets are achieved. Bidirectional long short-term memory (BiLSTM) with skip connections is designed as the structure of the fault detection network in SAAE. Further, a deep network with BiLSTM and residual neural network (ResNet) is proposed for the subsequent fault diagnosis step to avoid randomness imposed by the order of the input features. A framework for combining fault detection and fault diagnosis networks is also presented without the assumption of having a perfect fault detection network. A comprehensive comparison among relevant existing techniques in the literature and SAAE-ResNet is also conducted on the Tennessee-Eastman process, which shows the superiority of the proposed FDD method.