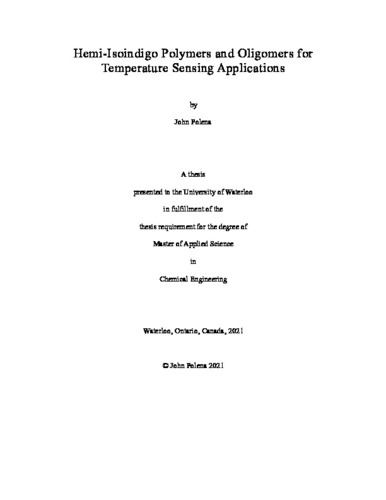 Organic semiconductors are extensively used for electronic applications such as OFETs and OPVs due to their low-cost and well-defined manufacturing processes. This includes vacuum deposition, solution processing, and roll-to-roll printing mainly for the production of electronics on flexible substrates. Organic semiconductor-based sensors have garnered much attention from the scientific community for a wide range of applications including point-of-care diagnostics, artificial skin, microfluidic monitoring, wastewater treatment, etc. Organic temperature sensors are of great interest in the medical field, specifically for vital signal monitoring where accurate temperature determination is imperative for the diagnosis and treatment of a patient. Besides that, other important parameters such as humidity, pH, etc. may have an inherent temperature dependence, hence sensors for said parameters must also include a way of determining and correcting for the environmental temperature. Organic materials, including small molecules and polymers, have demonstrated promising results for temperature monitoring but these materials often require the introduction of dopants to achieve sufficient conductivity. The resulting sensor devices still suffer from poor long-term stability, low selectivity, low reversibility, and solution-processable films often require the use of toxic chlorinated solvents which damage the environment. This thesis work aims to overcome the issues of poor long-term stability and the use of toxic chlorinated solvents by developing novel donor-acceptor hemi-isoindigo copolymers and hemi-isoindigo oligomers to fabricate sensors for real-time temperature monitoring. This work reports several strategies to achieve these goals including: i. Introducing functional groups on the thiophene unit of the hemi-isoindigo structure to improve sensor performance and dopant complex stability ii. Using thermally removable sidechains instead of aliphatic chains to improve electronic properties while maintaining solubility iii. Using well-defined oligomeric structures to improve the processability of the hemi-isoindigo material in less toxic solvents First, the synthesis of three hemi-isoindigo donor-acceptor copolymers PEEhB, PMEhB, and PTEhB utilizing a DDOBT donor unit are reported. The polymers are doped with F4TCNQ, and the resulting films are used to fabricate temperature sensors on flexible PET substrates with TCRs of -1.09%ºC, -1.09%/ºC, and -1.02%/ºC respectively. While these TCR values indicate good sensitivity, the complexes formed using the PTEhB and PMEhB crystalline polymers are not stable after four and twelve days, respectively. Conversely, the amorphous polymer PEEhB, with the highest EHOMO, forms a complex stable for over thirty-two days and has a significantly wider working range (25-120 ºC) than the other two polymers (25-60 ºC) which suggests it is a promising candidate for real-time temperature sensing applications. Then, the hemi-isoindigo structure was converted from polymers to two oligomers. OG-D1, derived from the M1 monomer structure of PEEhB, and OG3, derived from the M3 monomer structure of PTEhB. OG-D1, which is essentially a dimer of the M1 structure, utilizes thermally cleavable carbamate sidechains. These may be removed under moderate conditions which should lead to better coplanarity, and thus impart advantageous electronic properties in the oligomer film. Once annealed the resulting film, which is renamed OG-D1A, has a significantly lower EHOMO (-5.16 eV) than the three HID polymers. This material doped with F4TCNQ yielded a sensor with good sensitivity (TCR = -1.39%/ºC) and working range (25-120 ºC) comparable to that of PEEhB due to the removal of sidechains impeding the formation of insulating regions. However, the conductivity of the material drops over 80% in four days signaling poor complex stability. OG3 utilizes the same DDOBT donor unit as the polymers between two M3 acceptor units. The corresponding device using F4TCNQ has a TCR of -2.66%/ºC, significantly better than the previous devices which should be due to a different mechanism of charge transport, but a narrower working range (25-55 ºC). This film conductivity also drops within four days but not as dramatically as the OG-D1A device. To take advantage of the oligomeric nature of this material, it is then dispersed in isopropanol with PSS dopant and the corresponding film is moderately conductive (5.34 x 10-4 S/cm) as conceptual proof for fabricating conductive films using these materials without the need for toxic solvents.