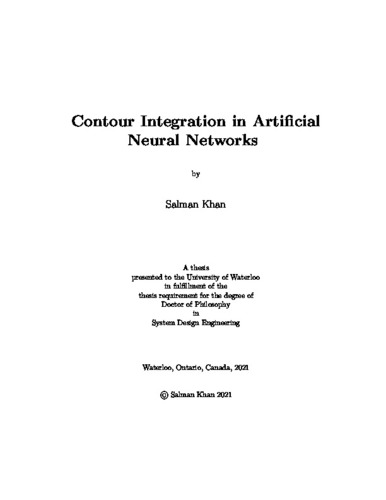 Under difficult viewing conditions, the brain's visual system uses a variety of modulatory techniques to supplement its core feedforward signal. One such technique is contour integration, whereby contextual stimuli from outside the classically defined receptive fields of neurons can affect their responses. It manifests in the primary visual (V1) cortex, a low layer of the visual cortex, and can selectively enhance smooth contours. Several mechanistic models, that can account for many of its neurophysiological properties, have been proposed in the literature. However, there has been limited exploration of the learning of biologically realistic contour integration circuits or of the role of contour integration in the processing of natural images. In this thesis, I present a biologically-inspired model of contour integration embedded in a task-driven artificial neural network. The model can relate the low-level neural phenomenon of contour integration to the high-level goals of its encompassing system. It uses intra-area lateral connections and an internal architecture inspired by the V1 cortex. Its parameters are learnt from optimizing performance on high-level tasks rather than being fixed at initialization. When trained to detect contours in a background of random edges, a task commonly used to examine contour integration in the brain, the model learns to integrate contours in a manner consistent with the brain. This is validated by comparing the model with observed data at the behavioral, neurophysiological and neuroanatomical levels. The model is also used to explore the role of contour integration in the perception of natural scenes. I investigate which natural image tasks benefit from contour integration, how it affects their performances and the consistency of trained models with properties of contour integration from more extensively studied artificial stimuli. Specifically, the model was trained on two natural image tasks: detection of all edges and the ability to distinguish if two points lie on the same or different contours. In natural images, the model was found to enhance weaker contours and demonstrated many properties that were similar to when it was trained on synthetic stimuli. Moreover, the features it learnt were robust and generalized well to test data from outside the distribution of training data. The results provide new evidence that contour integration can improve visual perception and complex scene understanding.