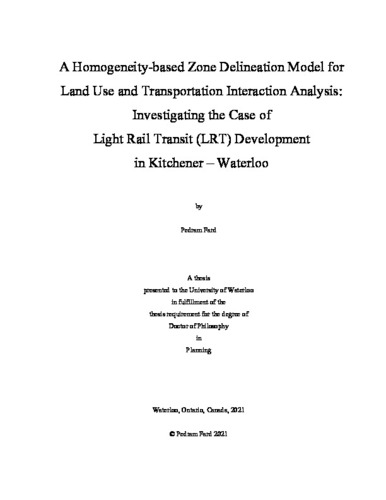 In an ever-increasingly urbanized world, planning policies bring direct and indirect societal and environmental impacts affecting quality of life for millions of people. Policy decisions are often complex, involving trade-offs between competing interests and high degrees of uncertainties. Quantitative methods have been used to understand the complexity of urban dynamics, to evaluate the alternative future scenarios and ultimately to help make more informed decisions. Despite the advantages these methods offer, they have been criticized for being ad-hoc, complicated and sensitive to the arbitrary choice of the indicators and the spatial scales of analysis. In particular, transportation analysis and modeling often rely on pre-set structures of Traffic (or Transportation) Analysis Zones (TAZs) to conceptualize geographic space as it relates to urban activities and transportation flows. Theory suggests that appropriately created spatial structures for transportation analysis should represent areas with homogeneous characteristics in terms of land uses and activities. Reviewing literature indicates that conventional TAZs do not necessarily provide satisfactory levels of homogeneity due primarily to the insufficiency of density as the primary measure to create these zones and the arbitrary use of roadways in breaking the zones boundaries. As we move towards an era in which new mobility modes emerge and modern data sources open up great opportunities, it is necessary to rethink the way we conceptualize space within land use and transportation system interactions (LUTI) studies. This research is motivated by the idea that land use diversity is equally important as densities (and other attributes) to define the spatial unit of analysis. The research aims to advance understanding of the impacts caused by the choice of analysis zones on the travel behavior and land use development analysis outcomes. This dissertation develops an enhanced measure of heterogeneity (i.e., land use diversity) and applies this measure to create a dynamic zonal structure through an iterative spatial aggregation method. This algorithm combines the input disaggregate zones that have similar diversity levels but also assembled from similar disaggregate land uses that make up their diversity. The developed spatial models are examined and validated using a set of disaggregate land use, travel behavior and the building permits data from Waterloo Region in southern Ontario, Canada. This research examines the effects of land use heterogeneity and access to rapid transit on an ongoing urban dynamic in this fast-growing mid-size metropolitan region. The first set of analyses explores the suitability of the proposed zonal structure – called Dynamic Activity Cluster Zones (DACZs) – compared to a commonly used pre-defined TAZ system and a graph-based spatial clustering model. The results indicate the advantages of the DACZ model in terms of concurrently creating more homogeneous zones with balanced size distribution. A sensitivity analysis is then performed to evaluate the robustness of the DACZ model in producing reliable zonal structures as a function of three parameters including aggregation heterogeneity threshold, levels of adjacency, and the original (input) spatial disaggregation. The results show that the model is effective in generating zones for which the size is defined as a function of homogeneity, as a result, these zones will generate more predictable outcomes in travel behavior modeling and analysis. The second work investigates the regional daily travel behavior data aggregated and compared for both the DACZ and a conventional TAZ structure used in the regional planning called PLUM (an acronym for Population and Land Use Model). The comparisons reveal that the impacts of built environment homogeneity on travel behavior are more pronounced within DACZs, where the dynamic zones effectively capture variations of the active transportation and public transit mode shares. This analysis also uncovers a varying pattern of mode share and the average travel times across the built environment categories identified based on the population density and land use diversity levels; by increasing the levels of population density and land use diversity more trips are shown to be made by non-auto modes. This outcome supports the LUTI theories which contend that areas with diverse land uses and high population density are more conducive to active transportation and public transit trips. The third investigation seeks to understand how the introduction of proposed and actual rapid transit investments are related to land use development trends. In a temporal analysis, the historical building permit data from 2000 to 2019 are analyzed focusing on two periods before and after the LRT project funding announcement (2010-2011). The adjusted permits construction values are calculated and compared across multiple scales including the study area, relative to the Regions’ Central Transit Corridor (CTC) and within different heterogeneous built environment categories. The results identify areas that have disproportionately attracted more and higher valued developments, especially after announcement of the LRT project funding. The outcomes also confirm the role of higher levels of land use diversity and access to rapid transit on attracting greater scale of land use developments, while the density is found to have minimal association with this trend. In summary, this study advances the research on land use and transportation system interactions by (i) articulating a novel spatial unit of analysis through developing and applying an enhanced homogeneity index and a spatial aggregation model, (ii) examining the associations between travel behavior patterns and heterogeneous built environment characteristics, (iii) providing insights on the development trends across Waterloo Region at multiple spatial-temporal scales that can be used in ongoing regional policy and planning evaluations, (iv) more generally facilitating the land use and transportation integration in planning and policy development through assessment and dissemination of a set of rigorous spatial modeling methods.