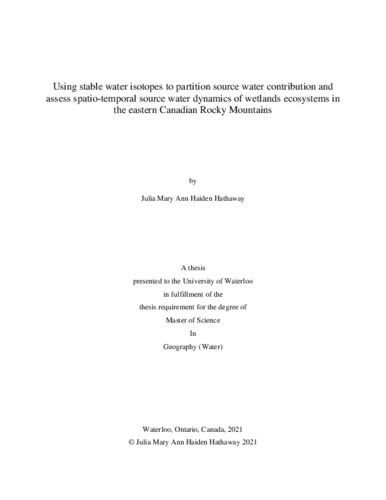 Subalpine and montane regions of the Canadian Rocky Mountains are expected to experience continued changes in hydrometeorological processes due to anthropogenically-tied climate warming. These regions are important in regulating the global water balance since they contribute a significant amount to annual surface runoff. The major river networks sustained by these catchments provide water to a large portion of people in western Canada and parts of the United States. In such environments, wetlands are important elements of mountain hydrologic systems because of their ability to regulate flow by contributing water to downstream sources. However, these ecosystems are potentially sensitive to changing hydrometeorological conditions and it is not clear how climate trends will affect source water composition. Therefore, an understanding of the contribution of subalpine and montane wetlands to downstream water bodies, and their controlling climatic factors, across space and time remains a major gap in mountain hydrological research. This thesis addresses these research gaps by using stable water isotope (δ2H and δ18O) techniques to partition source waters from a subalpine wetland to downstream water bodies and assess evaporative fluxes in wetland surface waters across spatial and temporal scales. Since different source waters have distinguishable isotopic signatures, they can be used in combination with knowledge of climate patterns and landscape characteristics to trace spatiotemporal water movement over catchment and regional scales. Source waters (e.g. rain, snow, groundwater, stream, and surface waters) were sampled and analyzed during the 2018, 2019, and 2020 growing seasons, then combined with historic data from 2012, to determine the relative contribution of wetland source waters to downstream water bodies and determine the influence of evaporative fluxes on wetland surface waters. Overall, the composition of downstream surface waters followed seasonal patterns and indicated periods of heavy source water mixing. There was strong seasonal dependence on snow meltwater, rainfall, and presumably, glacial meltwater during the pre-, peak, and post- growing seasons, respectively. Snowmelt inputs during the pre- growing season recharged groundwater stores and promoted downstream flow. Transitioning to the peak- growing season, the Burstall Valley relied heavily on rainfall to sustain saturation levels and generate runoff. Finally, inputs from glacial meltwater trigged rapid streamflow during the post- growing season resulting in a greater proportion of downstream surface waters originating from the Burstall Streams. There was minimal evaporation from Burstall Wetland throughout the growing season as seasonal source waters replaced waters stored within the landscape. However, this was not the case at extensive sites. Instead, evaporation fluxes followed a strong spatiotemporal gradient with stronger d-excess signals at lower elevations during the late summer, indicating greater surface water storage capacity. These results indicate that under certain climate conditions (e.g. drought, warmer temperatures), subalpine and montane wetlands may experience increased water loss or dry out during the late summer months if snowmelt continues to occur earlier in the year prolonging the growing season.