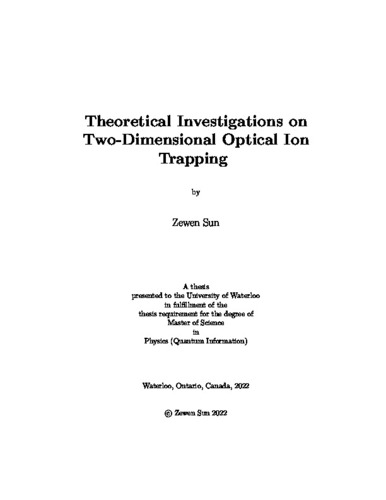 Trapped ion systems have become one of the important platforms for quantum information processing (QIP) experiments. However, conventional Paul ion traps suffer from micromotion effect, which makes it difficult to extend the trapped ion crystals beyond one-dimensional (1D) linear chain configuration, and limits the versatility of the systems. In this thesis, we propose a scheme of trapping two-dimensional (2D) ion crystals by combining conventional and optical trapping techniques. Integrating an optical cavity into linear Paul ion trap allows us to introduce an optical trapping period during which quantum gates can be performed without micromotion effect. We explored the required trapping parameters to constraining the system in 2D structure, by numerically calculating the equilibrium positions of ions under the potential defined by all trapping parameters. We then study the stability of 2D ion crystals between different spatial configurations, which do not arise from 1D systems. We also provide estimation of trapping lifetime by estimating heating rate of the system contributed from different sources which cannot be avoided by improving experimental designs. We find it is possible to trap tens of Yb+ ions optically with our scheme for a potentially long enough lifetime to perform QIP experiments, followed with the discussion on how to scale up the system. Strategies for trapping parameters optimization can be developed based on our stability analysis such that the optical cavity trap can be designed and built to fit different QIP experiments with experimentally feasible parameters.