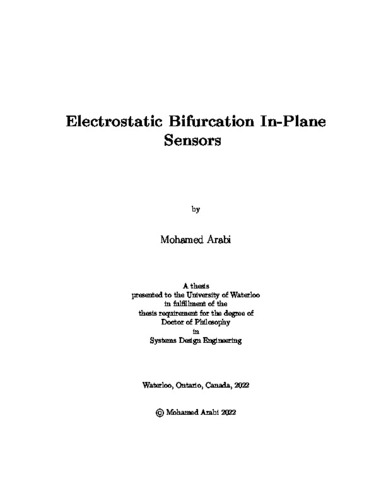 Electrostatic MEMS sensors are known for their high sensitivity, wide range of operation, and quick response. These unique attributes give Electrostatic MEMS sensors an edge over other MEMS transduction mechanisms (electrothermal, piezoresistive, piezoelectric, electromagnet, etc.) in many applications. The nonlinearity encountered in electrostatic MEMS is frequently considered a disadvantage. But it can also become a huge advantage when put to intelligent use, such as the case with bifurcation detection mechanisms. In this research, electrostatic MEMS sensors are deployed to detect various physical quantities. The motions of most MEMS sensors occur either in-plane, parallel to a ground plane or a substrate, or out-of-plane, perpendicular to it. In-plane sensors can alleviate the impact of the major damping source in MEMS, squeeze film damping. They can, therefore, provide higher quality factors than out-of-plane sensors. This is an advantage that has recently attracted interest. However, optical characterization of in-plane motions is challenging. We introduce a novel technique to measure both in-plane and out-of-plane motions of MEMS using a one-dimensional (out-of-plane) LDV. The technique's efficiency is demonstrated by evaluating an interdigitated comb-drive actuator's in-plane, out-of-plane modal response and frequency-response. We also investigate the validity of observing planar modes of vibration outside their dominant plane of motion and find that it leads to erroneous results. Planar modes must be evaluated in their plan of motion. Various ideas have been proposed to improve the quality factor further and reduce the actuation voltage of in-plane sensors. We undertook a comparative experimental study of two of these approaches to investigate their impact on the actuation voltage and sensitivity of in-plane sensors. Namely, placing actuation electrodes on both sides of the sensor to reduce actuation voltage vs. one side only to reduce damping. To improve sensitivity, building the sensors out of stiffer solid beams or lighter cavitary beams was also investigated. To investigate the effect of squeeze film damping on the behavior of electrostatic in-plane MEMS sensors, we solved the coupled nonlinear partial differential equations representing an electrostatically actuated sensor and a fluidic medium in the channel between the sensor and its actuation electrode. An Euler-Bernoulli beam model representing the sensor motions was coupled with a one-dimensional compressible Reynolds equation representing the fluid motions. The system was solved for the sensors in air and underwater using a Reduced Order Modeling approach. To demonstrate the versatility of electrostatic in-plane MEMS sensors, they were deployed for three applications in this work, namely pressure sensing, gas sensing, and underwater sensing. First, a novel electrostatic bifurcation pressure sensor is introduced. The sensor is made of a simple microstructure, cantilever, not diaphragm, that can easily be fabricated using a standard multiuser or a custom fabrication process. It does not need wafer bonding, sealing, or any complex microfabrication process to produce the pressure chamber. It overcomes the limitations of temperature in the other traditional diaphragm pressure sensors. Experimental results show that the electrostatic bifurcation pressure sensor has higher sensitivity and resolution than traditional MEMS diaphragm sensors. Second, electrostatic bifurcation gas sensors were designed and fabricated to detect toxic gases in air. The sensors were functionalized using a new deposition technique and two detector polymers. The sensors were used to detect three VOCs: formaldehyde, benzene, and hydrogen sulfide. The gas sensors showed good sensitivity for all three gases and selectivity for a target gas (formaldehyde) in the presence of an interferent gas (benzene). Finally, we present new bifurcation MEMS sensors to detect hazardous chemicals underwater. A special test chamber was fabricated to allow for testing the sensor underwater while measuring its response optically and electrically. The sensor was tested in air and underwater, and electrical measurements were recorded underwater. The results show that the sensor moves underwater, and two natural frequencies were observed.