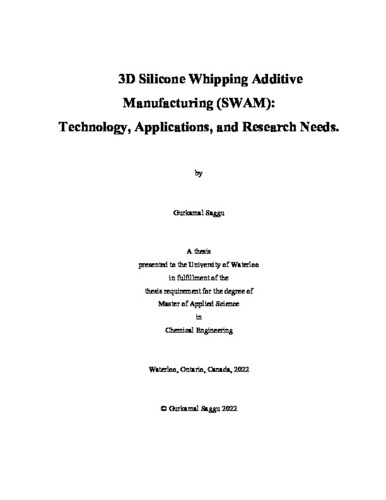 Additive manufacturing has become increasingly popular and is developing in many technologies. This thesis focusses on the additive manufacturing with paste technology, more specifically the goal is to further develop a technology for SWAM (Silicone Whipping Additive Manufacturing). SWAM uses a device similar to a traditional filament 3D printer, but it deploys a paste supplied by a pump instead of feeding a thermoplastic filament through a heated nozzle. There are many parameters that are common to both technologies, but the role of several variables is still not described or discussed in the literature. This is relevant because there are limited technologies capable of exploring the advantage of additive manufacturing with soft or elastomeric materials. A successful SWAM technology be used for developing prototypes that require soft materials, like seat cushion for automotive applications and used in tissue for soft robotics. One of the key parameters controlling the properties of a part manufacture by SWAM is the whipping mechanism of the paste. In this thesis, experiments are presented based on the relationship of SWAM parameters and “Line Printing” characteristics. Line Printing is an experimental method developed here to obtain further insight on the mechanism of SWAM and to enable correlation between SWAM parameters and properties of printed parts. The whipping extrusion techniques has successfully elucidated the liquid rope coiling effect. The SWAM parameters were selected as: Print speed of the nozzle, Diameter of the nozzle, Flow rate of the silicone feed, and Deposition height of the falling silicone paste. Whereas the Line Printing characteristics such as Filament deposition height, Filament line width and Filament loops have been determined. Filament loops are further subdivided into Single loops and Multiple loops. As a result, Line Printing may be defined as the novel free forming techniques for reproducing a single segment of the desired feed onto the printed bed using various forms of fabricating methods. It may also be called filament printing, filament fabrication, or line prototyping. It would be an aim to study the behavior of the material deposition as well as its transformed deposition ranging from straight-line printing to multiple or mixed-looped line printing. Hence, novel empirical relationships can be generated based on two boundaries elementary parametric conditions that are print speed and the other is flow rate. A novel parameter named GL ratio was introduced here to describe the transformation of the filament through filament characteristics. It would thoroughly define the feed flow dropping criterion. It is the ratio of the change in the feed flow rate to the change in the print speed of the nozzle while the other parameters are held constant. Five transformations of the line filament have occurred which are named as straight line, zig- zag/wavy loop filament, single loops filament, mix loops filament and multiple loops filament. Out of the 5, there are two unstable states, and the rest are stable states. Instability of filament is relatively high at the transition state because of the changing patterns of the silicone rope coiling effect, where GL is equal to unity. Line printing can be formed into multiple layers thus producing the bulk form which would be a porous structure, thus giving rise to a 3D shape due to controlled deposition of the filament due to the X-Y-Z location of the nozzle. In automotive applications, this technique can be used to create prototypes for an in-seat car cushion as a substitute for polyurethane (PUR) seat cushions. Herein, silicone has been used because of its versatile applications. The in-seat silicone cushions have been produced to perform force-deflection test to identify the mechanical feature. Viscoelastic properties of silicone concluded that novel SWAM can print lower density in-seat cushion along with variable firmness. The printed cushion showed that they can withstand the applied force for a longer time-period without decreasing with time. This feature would reveal that silicone can be a good material for seat cushioning. Hard-skinned robots can be modified to humanoid robots which would be ideal in the education system, especially for the autistic children. Soft tissue mimicking materials have been obtained through the line printing technique of the novel SWAM. Parts can be printed to resemble the firmness of fat and muscle tissues due to the displayed similar properties to that of real tissues through mechanical experiments. This could be applied in robots assisting autistic children for example, so they would learn response to external stimuli through humanoid robots in a more natural interactive environment