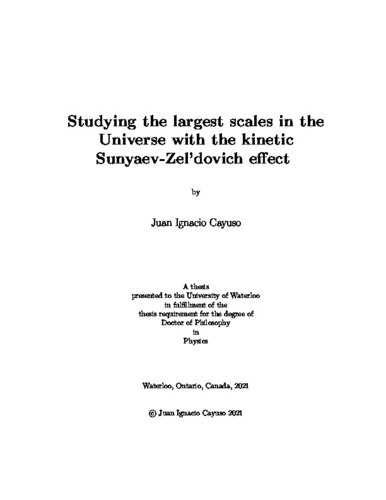 As we progress further into the era of precision cosmology, new avenues to test our fundamental models of the Universe are opening up. This Ph.D. thesis is concerned with the development and understanding of a technique known as kinetic Sunyaev-Zel'dovich (kSZ) velocity reconstruction, which aims to extract information about the Universe on the largest accessible scales using measurements of the Cosmic Microwave Background (CMB) anisotropies sourced by the kSZ effect and data from galaxy redshift surveys. kSZ velocity reconstruction estimates the remote CMB dipole, i.e. the l=1 multipole moment of the observed CMB sky as seen by observers on our past lightcone. This observable probes cosmological perturbations on scales of several Gpc, and thus has the potential to be a valuable source of information on the fundamental early Universe phenomena that leaves imprints on such scales. Preliminary forecasts from the foundational literature on kSZ velocity reconstruction indicate that high signal to noise reconstructions of the remote dipole will be possible in the context of next generation CMB experiments and galaxy surveys. The goal of this thesis is to further develop the technical details of the technique and provide motivation for its use as a tool to probe physics on ultra-large scales. Chapter 1 elaborates on the motivation behind this thesis and provides a review of the key material necessary to understand kSZ velocity reconstruction. Chapter 2 presents an extended formalism for kSZ velocity reconstruction, which describes new sources of noise and bias and incorporates more realistic experimental conditions. Forecasts for the reconstruction of the remote dipole are presented in the same chapter, and these show that high signal to noise is still achievable using the new estimators. Chapter 3 presents the first suite of N-body simulations of remote dipole reconstruction on our past lightcone, which implement a novel methodology to treat the wide range of scales involved in kSZ velocity reconstruction (tens of Mpc to tens of Gpc). These simulations were used to test the robustness of the reconstruction technique against the effects of gravitational non-linearities, redshift space distortions, and CMB lensing. Additionally, these simulations were used to demonstrate the relevance of large scale contributions to the remote dipole that are not captured by other approaches to kSZ velocity reconstruction. Chapter 4 presents an analysis of parameter constraints on CMB anomalies models, aimed to demonstrate that the reconstructed remote CMB dipole and the reconstructed remote CMB quadrupole (obtained using a similar technique to kSZ velocity reconstruction) can help us go beyond the constraints achievable with traditional probes of the anomalies like the primary CMB temperature, primary CMB polarization, and large-scale galaxy distribution.

Juan Cayuso (2022). Studying the largest scales in the Universe with the kinetic Sunyaev-Zel'dovich effect. UWSpace. http://hdl.handle.net/10012/17922