Characterization of Mrc1 during Replication Initiation in Saccharomyces cerevisiae 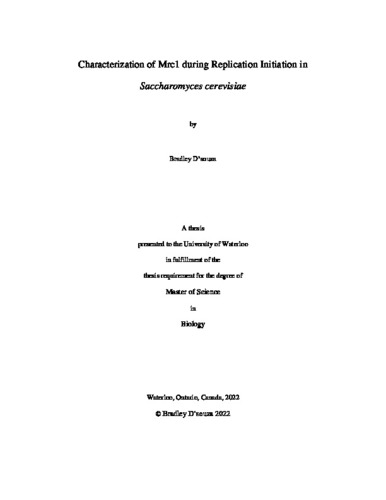 DNA replication is a highly specific process that is completed under the control of several factors, to ensure faithful duplication of the genome. Mrc1 (Claspin in mammalian cells) is a protein that is a part of a fork protection complex (FPC) to stabilize the association between the replisome and DNA as replication takes place. Mrc1 also mediates the intra-S phase cell cycle checkpoint response to resolve replicative stress, facilitating Mec1 sensor kinase phosphorylation of Rad53 effector kinase. Recent studies have revealed a potential role of Mrc1 in the regulation of origin firing timing through interactions with Dbf4-dependant kinase (DDK). DDK is required for replication initiation, phosphorylating Mcm2-7 helicase at origins of replication. DDK is composed of Cell division cycle 7 (Cdc7), the kinase component, and Dumbbell forming unit 4 (Dbf4), the regulatory subunit which activates Cdc7 once bound. Mrc1/Claspin binding to Cdc7 has been characterized in several model organisms but work in this thesis aims to specify the relatively uncharacterized interaction in Saccharomyces cerevisiae, also known as budding yeast. Initial yeast-two hybrid (Y2H) results confirm an interaction of budding yeast Mrc1 with Dbf4, rather than Cdc7. This implicates the possibility of a novel mechanism in regulating DNA replication in a checkpoint-independent fashion. Successive Y2H trials with several truncations of Mrc1 have revealed a distinct N1.1 region (amino acid residues 1 – 186) that is necessary and sufficient for binding to Dbf4. An Mrc1 ΔN1.1 strain was generated and subjected to growth curve trials to assess the phenotypic effect of this mutant under optimal growth conditions. Growth curve analysis revealed a consistent Mrc1 ΔN1.1 growth defect in comparison to wildtype cells in the absence of genotoxic stressors, supporting a checkpoint-independent role of Mrc1. Checkpoint response was subsequently assessed to ensure that the growth defect is not due to potential disruptions in the Rad53 kinase cascade pathway. A spot plate assay amongst various genotoxic stressors showed consistent Mrc1 ΔN1.1 growth to wildtype levels and significantly more growth in comparison to a ΔMrc1 strain. These results indicate intact checkpoint functionality, despite a growth curve defect that is speculated to be due to reduced DNA replication initiation. Overall, these results indicate that Mrc1 ΔN1.1 is a separation of function mutant between its role in DNA replication initiation and checkpoint response. Characterization of Mrc1 ΔN1.1 S-phase progression was conducted to specify the source of checkpoint-independent growth defect. Fluorescence-activated cell sorting (FACS) analysis results showed no significant differences in S-phase progression. However, plasmid stability assay results displayed a higher rate of average plasmid loss per generation within Mrc1 ΔN1.1 cells in comparison to wildtype. This confirms a minor deficiency in DNA replication which was not distinguishable in prior FACS analysis. In comparison to previous studies, findings outlined in this thesis confirm and further characterize distinct Mrc1-DDK binding in budding yeast, which is required for optimal growth rates and DNA replication stability. Further insight of this interaction will help distinguish between Mrc1s role in checkpoint response and normal DNA replication, which has implications in the development of clinical therapeutics for tumor cell lines with DDK overexpression.