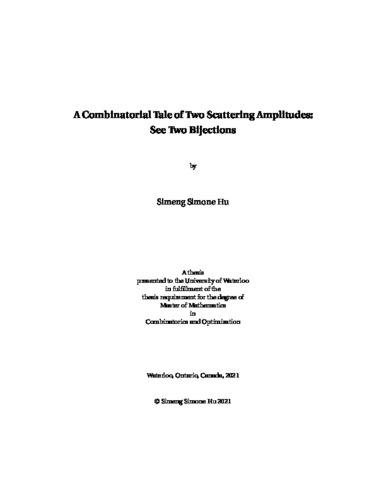 In this thesis, we take a journey through two different but not dissimilar stories with an underlying theme of combinatorics emerging from scattering amplitudes in quantum field theories. The first part tells the tale of the c2-invariant, an arithmetic invariant related to the Feynman integral in 𝜙4-theory, which studies the zeros of the Kirchoff polynomial and related graph polynomials. Through reformulating the c2-invariant as a purely combinatorial problem, we show how enumerating certain edge bipartitions through fixed-point free involutions can complete a special case of the long sought after c2 completion conjecture. The second part tells the tale of the positive Grassmannian and a combinatorial T-duality map on its cells, as related to scattering amplitudes in planar N = 4 SYM theory. In particular, T-duality is a bridge between triangulations of the hypersimplex and triangulations of the amplituhedron, two objects that appear as images of the positive Grassmannian. We give an algorithm for viewing T-duality as a map on Le diagrams and characterize a nice structure to the Le diagrams (which can then be used in lieu of the algorithm). Through this Le diagram perspective on T-duality, we show how the dimensional relationship between the positroid cells on either side of the map can be directly explained.