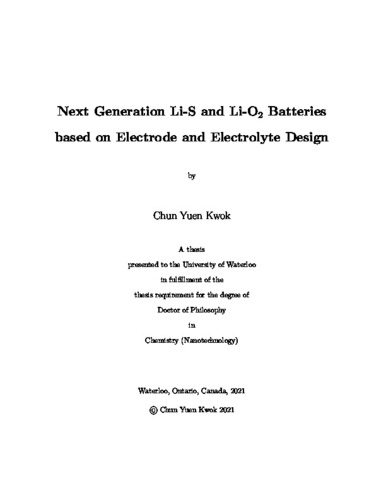 Decoupling our reliance on fossil fuel as the primary energy source emphasizes battery technology to store intermittent renewable energy such as solar and wind for sectors including grid energy storage, electric transportation, and machine operation. In view of the limitation in the theoretical energy density presented by lithium-ion batteries, other electrochemical systems are being pursued. Li-S and Li-O2 batteries are among the strong potential candidates. However, both battery systems are plagued by poor capacity retention, subpar Coulombic efficiency, low rate capabilities, and unsafe operation of lithium anode. This dissertation document presents strategies to resolve some of the aforementioned problems, from the perspective of electrode and electrolyte design. Considerations of confining polysulfides and stabilizing the cathode architecture for Li-S batteries are discussed. A novel cell design on Li-O2 batteries that leads to new oxygen electrochemistry is introduced. A new synthesis method to coat a solid-state electrolyte material as a protective layer on lithium metal is proposed. Projects presented in this thesis include. A holistic view in the fundamental surface mechanism and its correlation to the stability of Li-S cells. As some metal oxide host materials are known to mediate sulfur conversion via the surface-bound thiosulfate/polythionate complexes, it is worth investigating the condition of the activation for such a process, which can serve as a guide for host material selection. It is revealed that the activation process is triggered by the redox potential of the host material that sits within a targeted window. It is further shown that the capacity retention in Li-S cells is directly correlated to this activation process, demonstrated by long-term cycling experiments using high surface area oxide cathodes with redox potentials below, above, and within this window. Uncovering the complex surface chemistry in MXene to entrap polysulfides. The interactions between MXene and polysulfides are revealed to be a two-step, dual process. Namely, the formation of thiosulfate/polythionate complexes arises from the consumption of surface hydroxyl group on MXene by polysulfides, followed by the reported Lewis acid-base interactions between the underlying Ti atoms and the remaining polysulfides in electrolyte. Carbon nanotubes are further incorporated between MXene layers to support high sulfur loading (5.5 mg.cm-2) Li-S cells by realizing a high-surface-area and conductive network within the cathode composite. Selecting an appropriate binder material to maintain the architectural integrity of high-loading sulfur cathodes. Two cross-linked polymers may have very different cycling performances, despite their similarities in polysulfide adsorptivity. A key factor often overlooked is the compatibility between the monomer and cross-linker. Proper cross-linkages are necessary for binders to maintain good polysulfide binding effects and mechanical properties, evidenced by mechanical tests, microscopic images, deep cycling, and impedance studies on sulfur cathodes fabricated with these binders. The optimized cathode architecture enables Li-S cells to feature a low electrolyte/sulfur ratio of 7:1 (uL : mg) yet high areal capacity, up to 5.6 mA.h.cm-2, at a high sulfur loading of 6 mg.cm-2. A new Li-O2 battery design that enables a reversible four-electron conversion in oxygen electrochemistry. By operating the cell at 150 C and utilizing a bifunctional metal oxide host that catalyzes O-O bond cleavage on discharge, an inorganic Li-O2 cell can cycle via a highly reversible four-electron redox conversion that forms crystalline Li2O as the discharge product. Extensive chemical quantification experiments confirmed that Li2O oxidation involves a direct transfer of 4 e-/O2 A discharge mechanism is also proposed. This work shows that the Li-O2 battery cycling stability is no longer intrinsically limited once problems revolving around electrolyte, (su)peroxides, and cathode hosts are overcome. A facile and scalable route for the in-situ formation of a Li anode protection layer. Lithium phosphorus oxynitride - a class of solid-state electrolyte materials that forms a stable interface with lithium metal - is a promising candidate for protecting lithium anode. Its traditional synthesis route (atomic layer deposition), however, requires complex and stringent conditions. A new synthesis method via solution-mediated chemistry is introduced. The lithium phosphorus oxynitride layer prepared in-situ protects the lithium anode from polysulfide corrosion in practical Li-S cells, leading to an average Coulombic efficiency of at least 80 % without the aid of the conventional LiNO3 electrolyte additive.