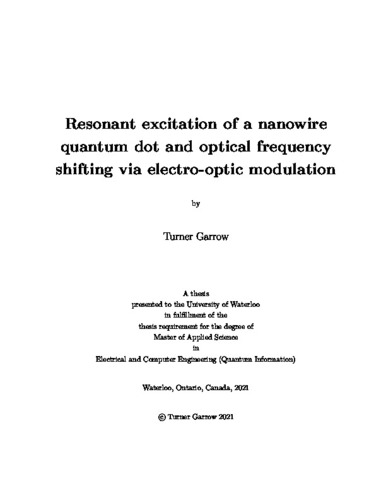 The ability to create pairs of entangled photons is a requirement for many near-future quantum technologies. Despite this, the current state-of-the-art entangled photon sources are fundamentally limited in their performance by their probabilistic nature. Recently, semiconductor quantum dots have gained a great deal of interest as candidates for next-generation entangled photon sources. Quantum dots can produce photon pairs deterministically, and therefore do not suffer from the same limitation. In addition, certain emission properties such as the emission direction, lifetime and spectral linewidth can be greatly improved by embedding the quantum dot within a nanostructure. The results in this thesis are from two separate, but related, techniques relating to the performance of an InAsP quantum dot embedded in an InP photonic nanowire. The first technique is resonant two-photon excitation of the quantum dot, a scheme of optically exciting the quantum dot which is expected to outperform all other optical excitation methods. Quantum dots use the biexciton-exciton cascade to generate entanglement, and the performance of the source depends on how the biexciton is generated within the dot. By directly populating the biexciton state of the quantum dot through two-photon excitation, the charge noise is decreased, which reduces both re-excitation of the dot and dephasing over the lifetime of the excited state. Using this method of excitation, we measure single photon purities of 0.9979(3) and 0.9985(2) for the emitted biexciton and exciton photons, respectively. Furthermore, quantum state tomography of the emitted pairs reveals a peak concurrence of 0.87(4), with a count-averaged concurrence of 0.52(3). This represents the first ever quantum state tomography measurement of a nanowire quantum dot excited with this excitation scheme. One downside of quantum dot-based photon sources is there tends to be some asymmetry introduced unintentionally in the fabrication process. This leads to an energy difference between the intermediate states of the biexciton-exciton cascade, called the fine structure splitting. The fine structure splitting causes the state to precess, so that the state emitted depends on the time between the first and second exciton recombinations. The second technique investigated in this thesis is an all-optical method of eliminating the fine structure splitting. This proposed method uses a pair of electro-optic modulators to shift the energy of the emitted photons and recover the state emitted by a quantum dot without any fine structure splitting. In this thesis, we demonstrate a lithium niobate electro-optic modulator capable of both increasing and decreasing the energy of photons, depending on their polarization. We show up-conversion of right circularly polarized light with 83.7% efficiency and down-conversion of left circularly polarized light with 80.7% efficiency. This demonstration shows that an all-optical fine structure eraser is feasible, and leaves us well-positioned for an experimental demonstration in the near future.